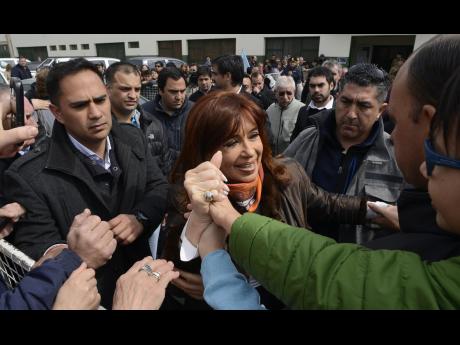 AP
Argentina's President Cristina Fernandez greets supporters as she arrives to cast her vote during elections in Rio Gallegos, Argentina,yesterday. Argentines are weighing continuity versus a financial overhaul in Sunday's elections as they pick Fernandez's successor.

Argentines weighed continuity versus a financial overhaul on Sunday as they picked the successor to President Cristina Fern·ndez, a polarising leader who along with her late husband dominated national politics for 12 years and rewrote the country's social contract.

On a chilly day when bars were closed and there were not the usual weekend soccer games, millions filed into schools, churches and other businesses converted into polling places to cast their votes - sometimes undecided right up to the last moment.

"The truth is I don't like any of the candidates," said Anai Roy, a 20-year-old college student who said she would make a choice in the polling booth. "So I just have to decide who is the best of bad."

Argentines are deeply divided about the rule of Fernandez and about who might improve the economic problems and corruption plaguing the South American nation of 41 million people.

Inflation is around 30 per cent, the economy is stagnant and a bitter court fight with a group of creditors in the US has scared off investors and kept Argentina on the margins of international credit markets.

But Argentines have a unique, nightmarish reference point for a truly bad economy: the financial collapse of 2001-2002, when the country defaulted on $100 billion in debt and overnight, millions in the middle class were impoverished.

"The economy is OK. It's not great," said Maria Victoria Murillo, an expert on Argentine politics at Columbia University's School of International and Public Affairs. "But for Argentina, OK is pretty good."

Daniel Scioli, the governor of the Buenos Aires province and a former vice-president, is the chosen successor to Fernandez, who nears the end of her second term with an approval rating around 50 per cent.