Migrant Balkan surge continues amid EU attempt to slow it 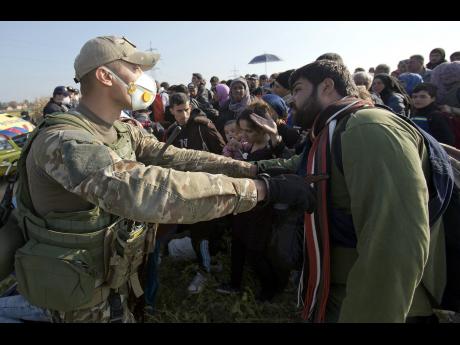 AP
A Slovenian soldier attempts to control a group of migrants as they walk through a field after crossing from Croatia in Rigonce, Slovenia, yesterday.

The surge of migrants crossing the Balkans on their way to Western Europe continued unabated yesterday in the hours after European leaders reached an agreement to slow the flow that has heightened tension among nations along the route.

European Union leaders committed to helping the Balkans handle the flow of people making their way through the region en route to more prosperous countries, but with cold weather setting in and record numbers of people arriving, questions remain about whether that assistance can come quickly enough to make a difference.

"This is a step in the right direction, and now it is crucial to respect the commitments," said Slovenian Prime Minister Miro Cerar, whose tiny Alpine nation has been overwhelmed by the flow since Hungary put up a fence on the border, with Serbia and Croatia diverting the flow to Slovenia.

Croatian police said yesterday morning that more than 13,000 migrants arrived from Serbia in the past 24 hours, while Slovenian police reported nearly 10,000 arrivals from Croatia in the same period. Further west, some 3,500 people had to sleep outside in Austria in cold fall weather, while Germany has said it had seen 15,000 arrivals over the weekend.