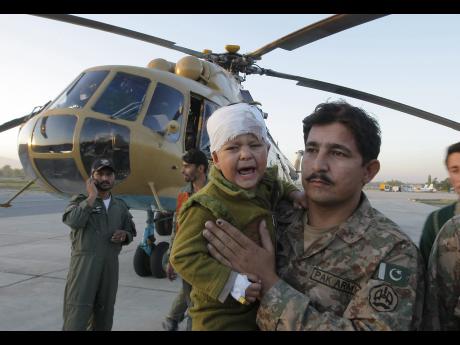 AP
A Pakistani soldier carries an injured child who was airlifted from Chitral following Monday’s deadly earthquake, at Peshawar airbase in Pakistan, yesterday.

Rescuers were struggling to reach quake-stricken regions in Pakistan and Afghanistan yesterday as officials said the combined death toll from the previous day's earthquake rose to 339.

According to Afghan and Pakistani officials, 258 people died in Pakistan and 78 in Afghanistan in the magnitude-7.5 quake, which was centred deep beneath the Hindu Kush mountains in Afghanistan's sparsely populated Badakhshan province that borders Pakistan, Tajikistan and China. Three people died on the Indian side of the disputed region of Kashmir.

Afghan authorities were scrambling to access the hardest-hit areas near the epicentre, located 73 kilometres (45 miles) south of Fayzabad, the capital of Badakhshan province. Teams on foot were sent to the most remote regions to assess damage and casualties, but air relief drops were not expected to begin for some days.

In Pakistan, the Swat Valley and areas around Dir, Malakand and Shangla towns in the mountains of Khyber Pakhtunkhwa province were also hard-hit. Officials said 202 of the dead were killed in Khyber Pakhtunkhwa.

The Pakistani town closest to the epicentre is Chitral, while on the Afghan side it is the Jurm district of Badakhshan.

More than 2,000 people were injured in Monday's temblor, which also damaged more than 4,000 homes in Pakistan, officials said.