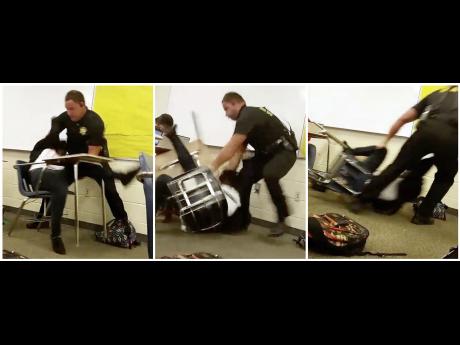 AP
This three image combo made from video taken by a Spring Valley High School student on Monday shows Senior Deputy Ben Fields trying to forcibly remove a student from her chair after she refused to leave her high school math class, in Columbia, South Carolina. 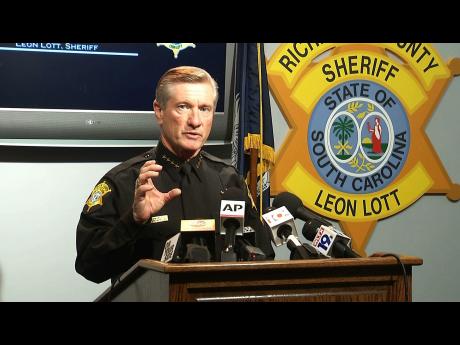 AP
Richland County Sheriff Leon Lott speaks during a press conference in Columbia, in relation to the suspension of Senior Deputy Ben Fields.
1
2

A girl who refused to surrender her phone after texting in math class was flipped backward and tossed across the classroom floor by a sheriff's deputy, prompting a federal civil-rights probe on Tuesday.

The sheriff said the girl "may have had a rug burn" but was not injured, and said the teacher and vice-principal felt the officer acted appropriately. Still, videos of the confrontation between a white officer and black girl stirred such outrage that he called the FBI and Justice Department for help.

Richland County Sheriff Leon Lott suspended Senior Deputy Ben Fields without pay, and said what he did at Spring Valley High School in Columbia made him want to "throw up".

"Literally, it just makes you sick to your stomach when you see that initial video. But again, that's a snapshot," he said.

Videos taken by students and posted online show Fields warning the girl to leave her seat or be forcibly removed on Monday. The officer then wraps a forearm around her neck, flips her and the desk backward on to the floor, tosses her toward the front of the classroom and handcuffs her.

Lott pointed out at a news conference that the girl can also be seen trying to strike the officer as she was being taken down, but said he's focused on the deputy's actions, as he decides within 24 hours whether Fields should remain on the force.

"I think sometimes our officers are put in uncomfortable positions when a teacher can't control a student," the sheriff said, promising to be fair.

In the meantime, the attorney representing the teen said his client did suffer several injuries during her arrest.

"She now has a cast on her arm, she has neck and back injuries. She has a Band-Aid on her forehead where she suffered rug burn on her forehead," Rutherford told the network.