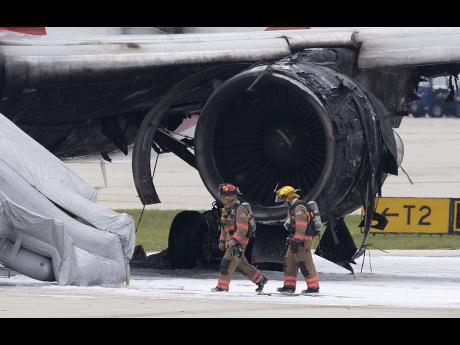 AP photo
Firefighters walk past a burned out engine of a Dynamic Airways Boeing 767 today.

The Fort Lauderdale airport is closed after a jet fire sent passengers scrambling down evacuation slides.

An airport spokeswoman said today that Fort Lauderdale/Hollywood International Airport would be closed for an indefinite amount of time because of the engine fire on the Dynamic Airways Boeing 767.

Broward Sheriff Fire Rescue spokesman Mike Jachles says one person endured burns that were not life-threatening, while the rest had bumps, bruises, sprains or were complaining of stress.

All were taken to hospitals.

The Boeing 767's left engine caught fire as it taxied for takeoff for a flight to Venezuela.

Meanwhile, a recording showed how an air traffic controller warned the pilot that the engine was leaking fuel before it suddenly caught fire.

WSVN-TV played a recording of the controller calmly telling the pilot that "a lot of fluid" was leaking out of the left engine.

The controller then urgently tells the pilot that the engine has caught fire and that firefighters are being dispatched.

The plane was taxiing for departure for Venezuela today when the fire began.