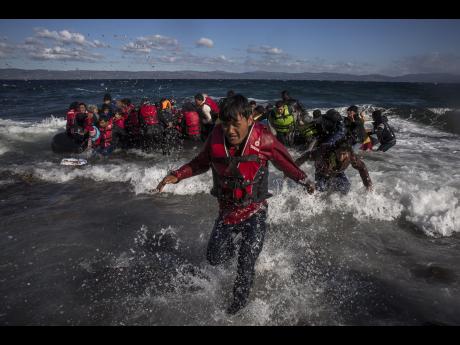 AP
Afghan migrants disembark safely from their frail boat in bad weather on the Greek island of Lesbos after crossing the Aegean see from Turkey, Wednesday. 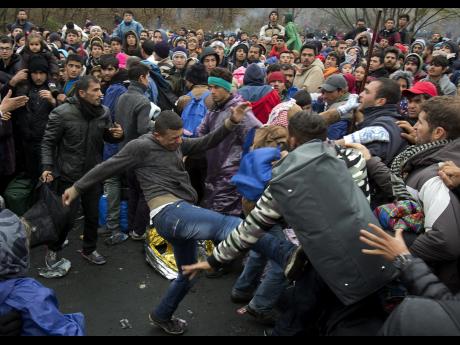 AP
Migrants scuffle as they wait to cross to Austria, in Sentilj, Slovenia, yesterday. Asylum-seekers hoping to reach Western Europe turned to crossing Slovenia after Hungary closed its border with Croatia with a barbed-wire fence.
1
2

An autumn chill had set in and winds were blowing at 30 miles per hour (50 kph) when the wooden boat, packed with families from Syria and Iraq, set out on the short crossing from Turkey to the Greek island of Lesbos and the promise of a new life in Europe.

Partway across, it capsized, triggering a scene of panic, confusion and compassion in a dramatic rescue recorded on video from a boat involved in the operation.

A Greek Coast Guard vessel sped to the site of the latest migrant catastrophe on Europe's doorstep. So did an array of volunteers, including Spanish lifeguards and Turkish fishermen, who crammed dozens of distraught people onto the decks of their small boats.

People bobbing in the water, the lucky ones in lifejackets, were hauled aboard fishing boats where they huddled, shaking and sobbing. It was too late for one man, pale and cold, who was placed gently into a black body bag. Several other corpses bobbed in the water.

Spanish lifeguards, who had left the beaches of Barcelona to help save refugee lives in Greece, dragged people from the water onto the backs of jet-skis.

The Greek Coast Guard said 242 people were rescued in the operation Wednesday night, including at least 18 children. At least seven people died, and more than 30 are missing.

As the rescue boats arrived in the port town of Molyvos, paramedics and local volunteers raced to treat the shocked, chilled survivors. Among them were children, some scarcely more than babies, bundled up by their parents for a perilous journey.