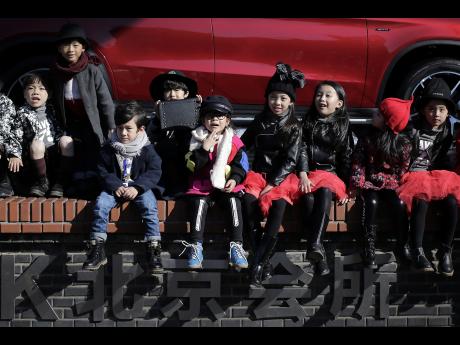 AP
Models for the children's wear fashion show wait outside the venue during the China Fashion Week in Beijing, yesterday. Chinas ruling Communist Party announced Thursday that the country will start allowing all couples to have two children, abolishing an unpopular policy that limited many urban couples to only one child for more than three decades.

China's ruling Communist Party announced yesterday that the country will start allowing all married couples to have two children, abolishing an unpopular policy that has limited many urban families to only one child for more than three decades.

The decision is the most significant easing of family-planning policies that were long considered some of the party's most onerous intrusions into family life and had been gradually relaxed in recent years. The restrictions led to an imbalanced sex ratio because of a traditional preference for boys, and draconian enforcement that sometimes included forced abortions.

The news elated 36-year-old Su Weihua in Guangzhou, who said she now plans to get pregnant next year and is eager for her eight-year-old daughter to have a sibling.

"I have looked forward to this for so many years, even had dreams about it! I cried every time when I woke up and realized it wasn't yet true. I thought it was so unfair," Su said. "I do not care if the second child is a boy or a girl, at my age, as long as he or she is healthy."

A statement from the party's Central Committee carried by the official Xinhua News Agency said the decision to allow all couples to have two children was "to improve the balanced development of population" and to deal with an aging population. Xinhua said the proposal must be approved by the top legislature before it is enacted, which is essentially a formality. It gave no indication of when that would happen.