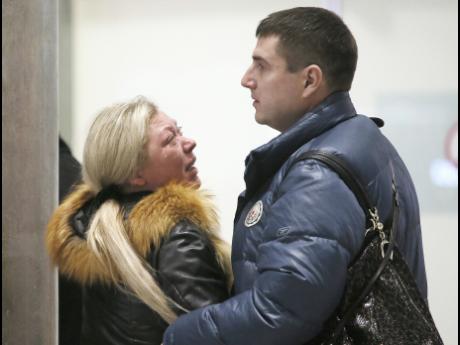 AP
Relatives of passengers on board a Russian aircraft react after hearing news that no one had survived the crash.

A Russian aircraft carrying 224 people, including 17 children, crashed yesterday in a remote mountainous region in the Sinai Peninsula about 20 minutes after taking off from a Red Sea resort popular with Russian tourists. There were no survivors.

According to Adel Mahgoub, chairman of the state company that runs Egypt's civilian airports, everyone on board was Russian except for three Ukrainian passengers. An Egyptian Cabinet statement said the 217 passengers were 138 women, 62 men and 17 children. There were seven crew members aboard the 18-year-old Airbus 321-200.

A senior aviation official said the pilot had radioed that the aircraft was experiencing technical problems shortly before air traffic controllers lost contact with the plane.

The Russian Embassy in Cairo said on its Twitter account that there were no survivors. Russian investigators were searching the Moscow offices of Metrojet, the company that owned the plane chartered by St Petersburg-based Brisco tour agency.

Most of the bodies recovered so far from the crash site were burned, said Egyptian military and security officials, who spoke on condition of anonymity because they were not authorised to brief the media. They said military rescue and search teams walked four kilometres (2.4 miles) on rugged terrain to reach the site.

President Abdel-Fattah el-Sissi offered his condolences to Russian leader Vladimir Putin in a telephone conversation, according to a statement issued by the Egyptian president's office.