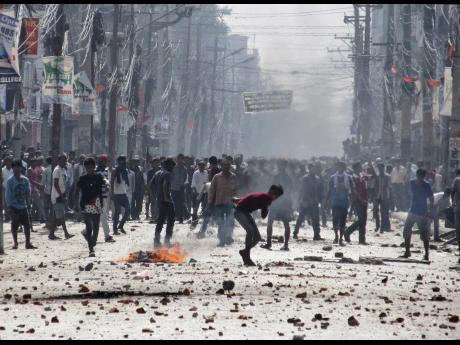 AP
Ethnic Madhesi protesters throw stones and bricks at Nepalese policemen in Birgunj, a town on the border with India, Nepal, yesterday.

Police shot at ethnic protesters who attacked a police station with gasoline bomb and stones on Nepal's southern border, killing an Indian man who was among the attackers, Nepalese officials said.

Police official Raju Bahadur Shrestha said six officers at the police station were injured. "One of our officers was almost burnt to death, we managed to rescue him," Shrestha said.

Shrestha said the man killed was an Indian involved in the attack, identified as Ashish Kumar Ram. Earlier, Indian police official Rakesh Kumar had said the man was on his way to the Nepalese town of Birgunj.

The attack happened about 300 metres (980 feet) inside Nepalese territory. People from Nepal and India are not required to have documents or visas to cross the border.

The ethnic Madhesi protesters said Nepal's new constitution unfairly divides the group into a number of states, diluting their political power. They want a larger state and more political representation. The protesters have imposed a general strike in southern Nepal and blocked the main border crossing between Birgunj in Nepal and Raxaul in India, resulting in a severe fuel shortage across Nepal. At least 45 people have been killed in the protests since August.

The Madhesi ethnic group has close cultural ties to India, whose officials have raised concerns about the new constitution's treatment of ethnic minorities.