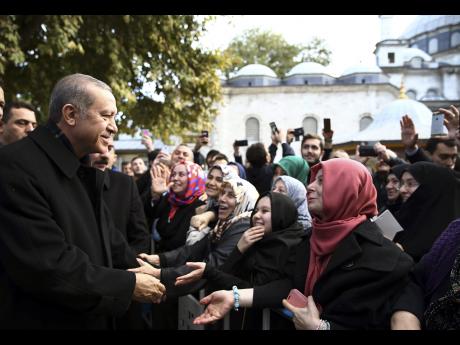 Turkish President Recep Tayyip Erdogan yesterday hailed a big victory for his ruling party in the country's parliamentary election and demanded the world respect the result.

The ruling Justice and Development Party, or AKP, secured a stunning victory in Sunday's snap parliamentary election, sweeping back into single-party rule only five months after losing it.

With all of the ballots counted early yesterday, the preliminary results showed that the party won more than 49 per cent of the votes. It was projected to get 317 seats in the 550-member parliament, restoring the party's single-party majority that it had lost in a June election.

Turkish financial assets were buoyant yesterday after the AKP's victory as investors hoped it will bring an end to a long period of political uncertainty. The Turkish lira was one big beneficiary from the result, surging by five per cent or so on foreign exchange markets.

"The whole world must show respect. So far I haven't seen such a maturity from the world," Erdogan said after attending prayers at a mosque and visiting his parents' graves.

It was an apparent reference to Western media's often critical coverage of AKP's policies in the past few years, including the ruling party's backsliding on democratic reforms and moves to muzzle critical voices.