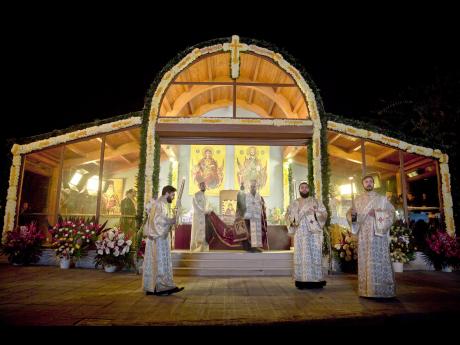 AP
A priest blesses holy remains at the Romanian Patriarchy in Bucharest, Romania, during the Saint Dimitrie Bassarabov pilgrimage. The Romanian Orthodox Church, makes, according to media estimations and official fiscal records, the highest profit of all public institutions.

Protesters calling for an end to widespread corruption and better governance this week have turned their anger to the powerful and rich Romanian Orthodox Church in the wake of a nightclub fire which left more than 30 dead.

Public discontent with the church is at an all-time high after it failed to address an outpouring of national grief. Pressure is mounting for its financial privileges to be reviewed.

"We want hospitals, not cathedrals!" Chanted tens of thousands of protesters this week.

Protesters want an end to hefty state subsidies to the nation's biggest church, to which 85 per cent of Romanians belong, and for the church to pay tax. Other officially registered churches are also given subsidies.

The Humanist-Secular Association said Roman has 18,300 churches, compared with 4,700 schools and 425 hospitals. Many were built after communism ended and religious restrictions were lifted.

In 2014, an election year, the government allocated 12 million euros ($13 million) for the 'Cathedral of the Salvation of the People' a giant church under construction in Bucharest, and £30 million (US$32.4 million) for building and repairing other churches.

Governments have been wary of challenging the influential church, which some politicians rely on for political support.