With excitement and hope, millions vote in Myanmar polls 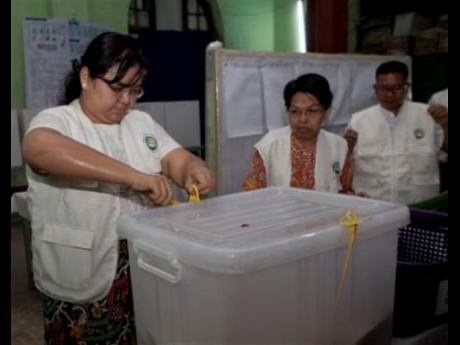 YANGON, Myanmar (AP) -- With tremendous excitement and hope, millions of citizens voted Sunday in Myanmar's historic general election that will test whether the military's long-standing grip on power can be loosened, with opposition leader Aung San Suu Kyi's party expected to secure an easy victory.

In a country that was under military rule for almost a half-century, many of the eligible 30 million voters cast ballots for the first time in what was billed as the nation's freest election ever. It was the first time even for Suu Kyi, the epitome of the democracy movement who had defied the junta for decades.

Wearing her trademark thazin flowers in her hair, a smiling Suu Kyi arrived at the polling station near her lakeside residence, where she was mobbed by hundreds of journalists. She quickly cast her vote and left without speaking to reporters.

Many people lined up in Buddhist temples, schools and government buildings early in the morning to vote, well before a heavy downpour beat down in Yangon an hour before voting ended peacefully in the late afternoon with no reports of major irregularities or violence.

Election monitors called it "a remarkable day" full of excitement and energy.

Vote counting began immediately, and hundreds of supporters gathered under umbrellas at the opposition National League for Democracy party's office hoping to see results. But party functionaries announced that results would not be available until Monday, and that the 70-year-old Suu Kyi would not address the crowd as expected, urging the crowds to return the next day.

"We won't be able to announce the results yet. All I can say is that the NLD is in a very good position," said Tin Oo, a co-founder of Suu Kyi's party. "It will take a while for the results to be announced."

Separately, the election commission said it would begin announcing results Monday at 9 a.m. and would continue throughout the day - and week. It has not said when final results are expected.

Although more than 90 parties are contesting the elections, the main fight is between Suu Kyi's National League for Democracy and the ruling Union Solidarity Development Party, made up largely of former junta members. A host of other parties from ethnic minorities, who form 40 percent of Myanmar's 52 million people, are also running.

"I think the country will be better if the party we chose or the leader we chose actually becomes the leader," said first-time voter Myo Su Wai. "I'm voting for NLD. That's my choice."

Certainly, though, the election will not bring full democracy to this nation, which spent nearly five decades under brutal military rule and the last five years under a quasi-civilian government. Myanmar's constitution guarantees 25 percent of seats in parliament to the military, and was rewritten to keep Suu Kyi, the country's most popular politician, from the presidency.

This time, however, there is hope that the election will move Myanmar a step closer to democracy.

After taking power in 1962, the junta first allowed elections in 1990, which Suu Kyi's party won overwhelmingly. A shocked army refused to seat the winning lawmakers, with the excuse that a new constitution first had to be implemented - a task that ended up taking 18 years amid intense international pressure. New elections were finally held in 2010, but they were boycotted by the opposition, which cited unfair election laws.

The USDP won by default and took office in 2011 under President Thein Sein, a former general who began political and economic reforms to end Myanmar's isolation and jump-start its moribund economy. But the USDP's popularity, or lack of it, was really tested in a 2012 by-election in which the National League for Democracy won 43 of the 44 parliamentary seats it contested.

Suu Kyi couldn't vote in any of those elections because she was under house arrest or there was no election in her residential area. But she did win a seat in parliament in the by-election.

Thein Sein voted Sunday in the capital, Naypyitaw, and reiterated that the ruling party would respect the results.

Asked by the Irrawaddy online magazine what he would do if his party loses, Thein Sein said: "I have to accept it as it is. ... Whatever it is, we have to accept our voters' desire. Whoever leads the country, the most important thing is to have stability and development in the country."

Even if Suu Kyi's party secures the highest number of seats in the bicameral legislature, it will start with a disadvantage because of the reserved places for the military in the 664-seat parliament.

This means in theory that the USDP, with the military's support, need not win an outright majority to control the legislature. To counter that scenario, the NLD would require a huge win.

That may not be farfetched, given Suu Kyi's popularity.

After the polls, the newly elected members and the military appointees will propose three candidates, and elect one as the president. The other two will become vice presidents. That vote won't be held before February.

Suu Kyi cannot run for president or vice president because of a constitutional amendment that bars anyone with a foreign spouse or child from holding the top jobs. Suu Kyi's two sons are British, as was her late husband.

The military is also guaranteed key ministerial posts - defence, interior and border security. It is not under the government's control and could continue attacks against ethnic groups. But critics are most concerned about the military's constitutional right to retake direct control of government, as well as its direct and indirect control over the country's economy.

Richard Horsey, a Myanmar analyst, said that given the powers it has, the military will not be too perturbed about allowing a transfer of power to the NLD if it wins.

"But that's not to say the relationship between the new administration and the military will necessarily be a strong one," he said. "It's very difficult to imagine that anyone will be running the country without having the support of the military."

There are concerns also about the vote's credibility, because for the first time, about 500,000 eligible voters from the country's 1.3 million-strong Rohingya Muslim minority were barred from casting ballots. The government considers them foreigners even though many have lived in Myanmar for generations. Neither the NLD nor the USDP fielded a single Muslim candidate.

Abdul Melik, a 29-year-old Rohingya, spent election day watching other people vote. He stared out from a camp on the outskirts of western Rakhine state's capital, Sittwe, where the Rohingya are forced to live in squalid camps and can't leave without official approval.

"I can see the Buddhist Rakhine, the Kaman Muslim and Hindus voting at a polling station close to the barricades," he said in a telephone conversation. "We were hoping that somehow we'd be allowed to vote. But today I have lost hope of any change in my lifetime."

"This is the day that hope ends," he added.