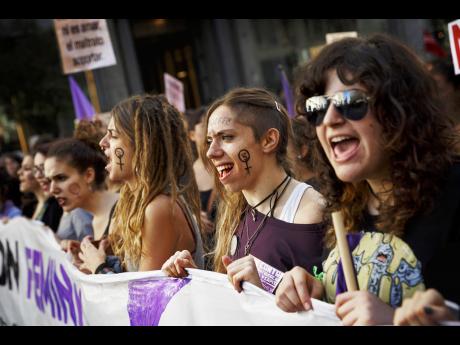 AP
Females shout slogans as they march during a demonstration against domestic violence towards women, in Madrid, Spain, yesterday.

Thousands of people from all over Spain converged on Madrid on yesterday to march against domestic violence.

The march got underway after Angela Gonzalez, whose daughter was murdered in 2003 by her abusive ex-husband during a visit allowed by judicial authorities, spoke in memory of those who died as a result of gender-based attacks.

Gonzalez said that since 1995, more than 1,390 women have been murdered in Spain by male attackers and that, so far, this year, 84 cases of murders of women by men have been recorded.

Organisers said 21,000 people travelled to take part, including some who flew in from Spain's Balearic and Canary islands.

Landmarks like city hall and the Cibeles fountain in downtown Madrid had been bathed in purple light during the past few nights in commemoration of women who have suffered gender-based violence.