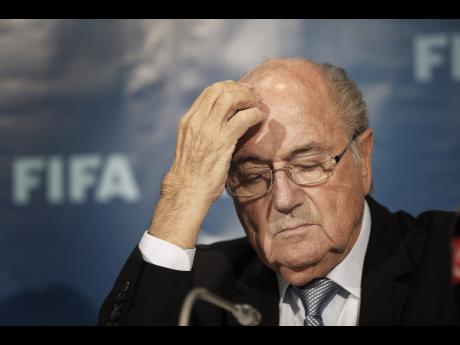 Sepp Blatter remains in a Swiss hospital after what his spokesman called a 'small breakdown' related to stress.

"(Blatter) will be back officially in business on Tuesday next week," Stoehlker said in a telephone interview. "The checkup is finished and he is recovering."

On Friday, Blatter's American lawyer told the AP that he was at a hospital. On Wednesday, long-time Blatter aide Walter Gagg told the AP "he was always at the hospital."

Blatter is appealing against his 90-day provisional ban by the FIFA ethics committee over suspected financial misconduct.

He still hopes to host the Ballon d'Or award ceremony in Zurich on January 11, after the suspension expires, Gagg said on the sidelines of a meeting of Olympic sports.

On that day in Zurich, FIFA will elect a successor to Blatter, ending his more than 40 years working for soccer's governing body.

Even if Blatter gets his interim ban lifted, by the FIFA appeal committee or Court of Arbitration for Sport, he then faces a full hearing before the ethics committee.

Blatter and UEFA President Michel Platini were banned in the wake of a Swiss criminal case investigating financial misconduct at FIFA.

The criminal case centers on whether Blatter misused FIFA money by making a $2 million payment to Platini for backdated salary in 2011.