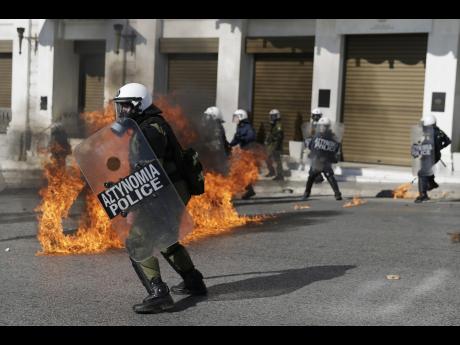 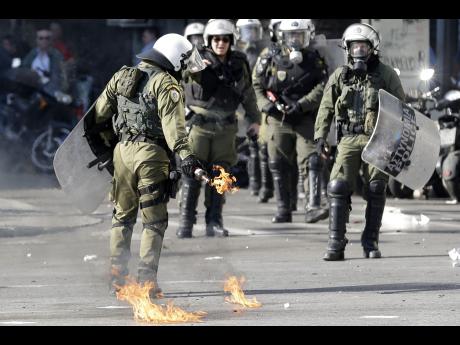 AP
A riot policeman removes a petrol bomb, thrown by protesters, from the street during a rally in Athens, yesterday.
1
2

Clashes briefly broke out yesterday between riot police and protesters in central Athens during the first general strike since the country's left-led government initially came to power in January.

Youths broke away from a protest march by thousands as it passed outside parliament and threw Molotov cocktails at police who responded with tear gas and stun grenades. Demonstrators scattered, but calm returned within the hour.

Nearly 25,000 people participated in three separate demonstrations in central Athens, according to police figures, to protest a new round of bailout-related tax hikes and spending cuts. Another 10,000 marched without incident through the country's second largest city of Thessaloniki.

The Athens metro and suburban railway shut down while bus, trolley and train routes were reduced and ferries remained tied up in port, severing connections between islands and the mainland. More than a dozen domestic flights were cancelled.

The strike closed museums and archaeological sites, including the Acropolis, as well as state schools and pharmacies. Hospitals were functioning with emergency staff, while many privately owned shops also shut down.