Gov’t vows to punish IS for Paris attacks 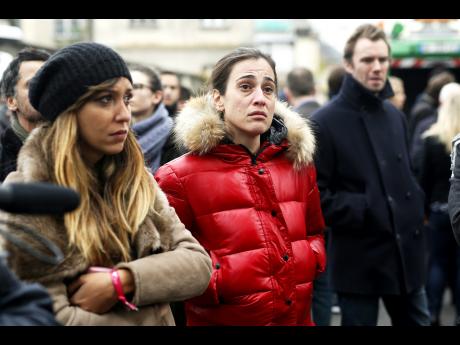 AP
People react in front of the Carillon cafe and the Petit Cambodge restaurant in Paris yesterday. 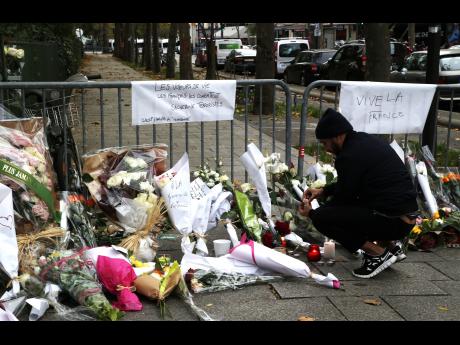 AP
A man lights up a candle outside the Bataclan theater in Paris, yesterday. Poster at right reads "Long Live France," at left: "The French fight those who steal life. Terrorists, be aware."
1
2

French President Francois Hollande vowed to attack the Islamic State (IS) group without mercy as the jihadist group claimed responsibility yesterday for orchestrating the deadliest attacks on France since World War II.

Hollande, who declared three days of national mourning and raised the nation's security to its highest level, called the carnage "an act of war that was prepared, organised, planned from abroad with internal help".

The Islamic State group's claim of responsibility appeared in Arabic and French in an online statement circulated by IS supporters.

It was not immediately possible to confirm the authenticity of the admission, which bore the group's logo and resembled previous verified statements from the group.

The statement mocked France's involvement in air attacks on suspected IS bases in Syria and Iraq, noting that France's air power was "of no use to them in the streets and rotten alleys of Paris".

Many of the city's top tourist attractions closed yesterday, including the Eiffel Tower, the Louvre Museum, and the Disneyland theme park east of the capital.

Parisians expressed shock, disgust and defiance in equal measure. Some areas were quiet, but hundreds queued outside a hospital near the Bataclan concert hall, scene of the worst violence, to donate blood.

As a shrine of flowers expanded along the sidewalk, a lone guitarist sang John Lennon's peace ballad, Imagine.

Ahsan Naeem, who has lived in Paris for the past seven years, said he and his friends one of whom was hurt by "bullet shrapnel" inside the club were still in shock.

"These places are the places we visit every week," he said, "streets we walk every day. I've seen dozens of gigs at the Bataclan, eaten at the Petit Cambodge, sat outside Le Carillon on so many nights."

Officials said a suicide bomber at the concert hall was identified as a young Frenchman flagged in the past for links with an Islamic extremist activity, and a Syrian passport was recovered from the remains of another suicide bomber outside the stadium.

Officials in Greece said the attacker with the Syrian passport had entered in October through Leros, one of the islands that tens of thousands of people fleeing war and poverty in Syria and elsewhere have been using as a gateway to the European Union in recent months.