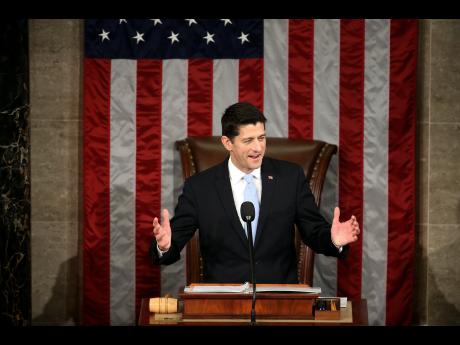 House Speaker Paul Ryan yesterday called for a pause in Syrian refugees coming to the US in the wake of the Paris attacks and said the House will vote on the issue this week.

"Our nation has always been welcoming but we cannot let terrorists take advantage," Ryan, a Republican, said yesterday. "Better to be safe than sorry. Take a pause in this particular aspect of the refugee program."

Emerging from a closed-door meeting yesterday, Republicans said the chairmen of national security-focused committees were working on legislation dealing with Syrian refugees that the House could vote on as early tomorrow.

The rush to stop the influx of Syrian refugees escaping Mideast violence troubled several Democrats, including Republican Luis Gutierrez, who likened the reaction to the US government turning away Jews fleeing Nazi Germany and placing Japanese in internment camps during World War II.

"Let us as legislators rise above petty politics, rise above sectarian fears ... the underlying layer of xenophobia," Gutierrez said on the House floor. "Let us maintain America's commitment as a beacon of hope."