Salvadoran teens reunite with parents under US program 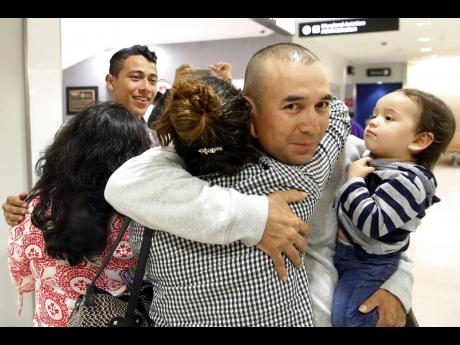 AP
Gabriel Mejia hugs his daughter Wendy, 16, as he holds his son Elias, after her arrival from El Salvador at the Baltimore-Washington International Airport in Linthicum. 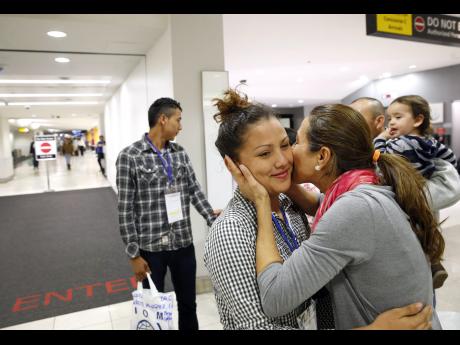 AP
Wendy Mejia, 16, hugs her aunt after her arrival from El Salvador at Baltimore-Washington International Airport in Linthicum, after 15 years apart.
1
2

For years, Brian Mejia begged for his father's blessing to slip out of his village in El Salvador and make the perilous trek to the United States, away from the gang violence that drove his father across the border. For years, Gabriel Mejia said no, recalling his own days-long journey through the desert, his skin sore from the persistent pricks of cactus needles.

Gabriel Mejia could no longer stand the persistent bloodshed in his homeland, 15 years after arriving in the US, and was beginning to come around to the idea of sending a smuggler for his 19-year-old son and 16-year-old daughter, Wendy. Then, they got word they wouldn't need to sneak in, thanks to a State Department programme aimed at helping children reunite with their families on US soil. Last Thursday night, Mejia and his wife, Virginia de la Paz Marquez, anxiously waited with the US-born siblings their elder children had never met: One-year-old Elias and eight-year-old Janet, wearing a sweater emblazoned with a pink heart. Mejia made faces at the baby; his wife fended off tears and bouts of nervousness as weary travellers streamed through the gate and down the stairs to baggage claim. Then, they were overcome as their years apart ended: Marquez alternated between laughter and tears as she embraced her son, then her daughter, both teens wearing an oversized tag identifying them as refugees.

Brian and Wendy are among the first six teenagers to travel legally to the United States under the Central American Minors programme, said Ruben Chandrasekar, executive director for the Baltimore office of the International Rescue Committee. The resettlement agency is submitting hundreds of applications on behalf of parents desperate to bring their children to America. However, there are more than 5,000 children and teens just like them who have applied but are still waiting to be contacted by the Department of Homeland Security. So far, only 90 children have been interviewed.