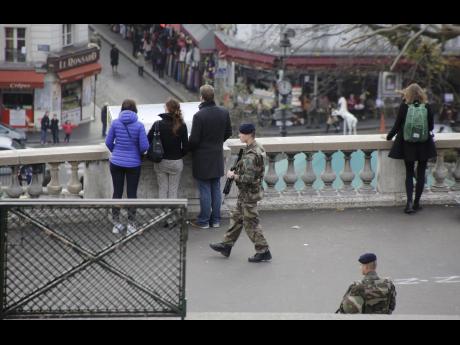 Gunfire and explosions shocked already-jittery residents of a Paris suburb awake Wednesday as police raided an apartment where they believed the suspected mastermind of last week's attacks was holed up.

Two people were killed in the seven-hour siege, including a woman who blew herself up, and seven others were arrested.

There was no clear information on the fate of the suspected planner of the attacks, 27-year-old Abdelhamid Abaaoud.

Paris prosecutor Francois Molins said the dead were a woman who blew herself up with an explosive vest and a man hit by projectiles and grenades.

He said the raid was launched after information from tapped telephone conversations, surveillance and witness accounts indicated that Abaaoud might be in a safe house in the north Paris suburb of Saint-Denis.

Authorities could not immediately confirm whether Abaaoud was killed or arrested Wednesday morning.

Investigators have identified Abaaoud, a Belgian of Moroccan descent, as the chief architect of Friday's attacks in Paris, which killed 129 people and wounded 350 others.

A US official briefed on intelligence matters said Abaaoud was a key figure in an Islamic State external operations cell that US intelligence agencies have been tracking for months.

Abaaoud was believed to have escaped to Syria after a January police raid in Belgium, but bragged in Islamic State propaganda of his ability to move back and forth between Europe and Syria undetected.

The site of Wednesday's raid is just over a mile (less than two kilometers) from the Stade de France soccer stadium; three suicide bombers blew themselves up outside the stadium during an international soccer match Friday.

They were one of three teams of attackers who also targeted a rock concert at the Bataclan theater as well popular night spots in a trendy Paris neighborhood.

The Islamic State group has claimed responsibility for the carnage, which has left France in mourning and on edge.