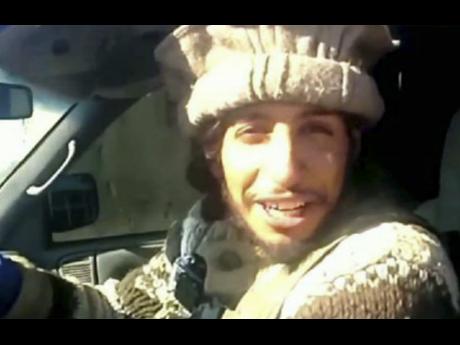 The Belgian extremist suspected of masterminding the deadly attacks in Paris died a day ago along with his female cousin in a police raid on a suburban apartment building, French officials said today, adding it was still not clear exactly how he died.

The body of Abdelhamid Abaaoud, 27, was found in the building targeted Wednesday in the chaotic, bloody raid in the Paris suburb of Saint-Denis and was identified based on skin samples, the Paris prosecutor's office said Thursday.

Abaaoud ended up near Paris after reportedly being in Syria, but officials have not said how he managed to travel across so many borders en route to the French capital.

In addition, authorities have not detailed his exact whereabouts or actions during the deadly rampage that killed 129 people last week in Paris.

Three police officials have told The Associated Press that a woman who died in the police raid was Abaaoud's cousin.

Two men carry a body into a hearse after an intervention of security forces against a group of extremists in Saint-Denis, near Paris, Wednesday. - AP Photo

One said the woman, Hasna Aitboulahcen, is believed to have detonated a suicide vest Wednesday in the building after a brief conversation with police officers.

The official confirmed an audio recording, punctuated by gunshots, in which an officer asks: "Where is your boyfriend?" and she responds angrily: "He's not my boyfriend!" Then loud bangs are heard.

The bodies recovered in the raid were badly mangled, with part of Aitboulahcen's spine landing on a police car, slowing down the identification process, according to one of the officials.

The three all spoke on condition of anonymity because they were not permitted to divulge details of the investigation.

French police launched the operation after receiving information from tapped phone calls, surveillance and tipoffs suggesting that Abaaoud was holed up in the apartment.

Eight people were arrested in the raid.

In Belgium, authorities launched six raids in the Brussels region today linked to Bilal Hadfi, one of the three suicide bombers who blew themselves up outside the Stade de France.

Bullet holes and smashed windows are pictured on the back side of the house after an intervention of security forces against a group of extremists in Saint-Denis, near Paris, Wednesday. – AP Photo

An official in the Belgian federal prosecutor's office told The Associated Press the raids were taking place in the suburb of Molenbeek and other areas of Brussels.

The official, who spoke on condition of anonymity because the investigation is continuing, said the actions were focusing on Hadfi's "entourage".

With France still reeling from the November 13 attacks that killed 129 and wounded hundreds, France's lower house of parliament, the National Assembly, voted Thursday to extend a state of emergency for three months. The measure now goes to the Senate, where it likely will be approved.

The state of emergency expands police powers to carry out arrests and searches, and allows authorities to forbid the movement of people and vehicles at specific times and places.

Prime Minister Manuel Valls had pressed for the state of emergency extension, warning that Islamic extremists might at use chemical or biological weapons.

"Terrorism hit France not because of what it is doing in Iraq and Syria ... but for what it is," Valls told lawmakers. "We know that there could also be a risk of chemical or biological weapons."

Valls did not say there was a specific threat against France involving such weapons, however.