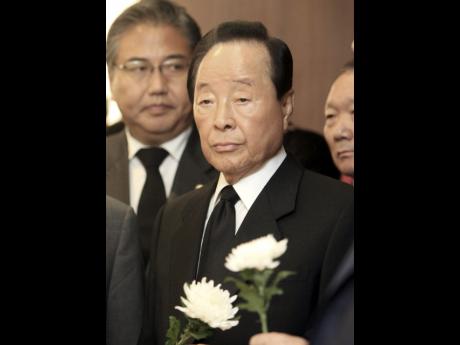 The chief of Seoul National University Hospital, Oh Byung-Hee, told a televised briefing that Kim died there early Sunday. He said Kim is believed to have suffered from a severe blood infection and acute heart failure before he died.

Kim was taken to the hospital on Thursday due to a high fever, Oh said. In recent years, Kim had been treated at the hospital for stroke, angina and pneumonia, Oh added.

Kim was an important figure in South Korea's pro-democracy movement and opposed the country's military dictators for decades.

As president, Kim laid the foundation for a peaceful power transfer in a country that had been marked by military coups.

During his presidency from 1993-1998, he had his two predecessors indicted on mutiny and treason charges stemming from a coup.

Still, Kim pardoned the two convicted military strongmen - Chun Doo-hwan and Roh Tae-woo - at the end of his term.

Kim also launched a popular anti-corruption campaign and vowed not to receive any political slush funds, though this was later tarnished when his son was arrested on charges of bribery and tax evasion.

Kim lobbied against the idea, fearing a possible war.

Kim is survived by his wife and two sons and three daughters.