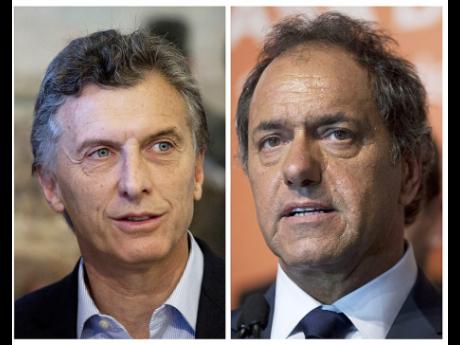 CAPILLA DEL SENOR, (AP) -- In attempts to attract independent voters, the two candidates in today's runoff election have tailored their messages to the centre. But in essence they represent starkly different economic visions.

Daniel Scioli, the governor of sprawling Buenos Aires province who is backed by the outgoing president, presents himself as the continuation of the majority of the current administration's policies, with small tweaks where needed.

Mauricio Macri, the opposition mayor of Buenos Aires, wants to liberalise the economy, from lifting the currency restrictions to scrapping many export and import taxes.

Marcelo Cervigni watches a huge tractor planting soybeans on his farm while flipping through smart phone photos of neighbouring canola fields pummelled by a hail storm the night before.

The damage will cost him about US$80,000, a painful blow from nature but one he says is minor compared to the taxes and export restrictions put on farmers by outgoing President Cristina Fernandez. He hopes they will be lifted by the new president being elected today.

"It's not good to be in a business where profits are getting closer to zero," said Cervigni, a fourth-generation farmer.

For sectors ranging from agricultural to banking, there is a lot at stake for Latin America's third-largest economy in today's runoff election.

Fernandez and her late husband Nestor Kirchner, who was president before her, unabashedly increased the role of the State. They spent heavily on programs for the poor while sharply increasing taxes and adding regulations aimed at keeping prices low at home for things like bread and bus rides.