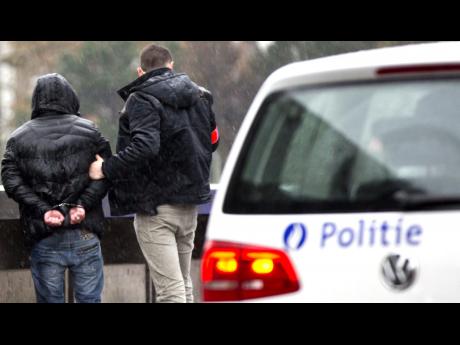 AP
Police detain a man in handcuffs after stopping and searching his car which had French number plates in Brussels on Saturday.

The family homes of the suspected mastermind of the Paris attacks and one of the suicide bombers stand only a few blocks apart in the Belgian capital's Molenbeek neighbourhood.

After a string of attacks in recent years linked to its grimy streets in central Brussels, a key question arises: Why Belgium?

The tiny nation renowned for beer, chocolates and the comic book hero Tintin is now suddenly infamous for Islamic extremism and the easy availability of illegal weapons.

Yesterday, Belgian Prime Minister Charles Michel said Brussels was placed on its highest level of terror alert in response to information about the risk of an attack like the one in Paris last week.

The raised security level came as the manhunt continued for extremist Salah Abdeslam, who took part in the Paris attacks.

Belgium has a central location in Europe; few border controls; a common language with prime jihadi target France; and a political divide between French and Dutch speakers that has long created bureaucratic disarray in justice and security.

From the prime minister down, there is widespread acknowledgement of a complicated and disjointed national structure that hampers the fight against extremism.

"We have to do more and we have to do better," Michel told legislators last Thursday as he announced a slew of fresh measures to fight Islamic extremism.

For years, there have been calls for more funds to boost the ranks of judges and police, but progress has been slow as rival political camps bickered and austerity measures set in.