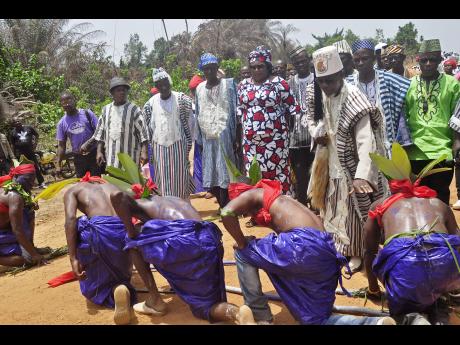 AP
In the March 2015 photo, men, foreground, take part in a traditional ceremony for people who died due to the Ebola virus and that got cremated at a crematorium on the outskirts of Monrovia.

Three new Ebola cases have been confirmed in Liberia, a health official said last Friday, more than two months after the West African nation was declared Ebola-free for a second time. It is a setback for Liberia, one of the three countries hit hardest by the worst Ebola outbreak in history.

The country has recorded more than 10,600 cases and more than 4,800 deaths, according to the World Health Organisation (WHO). More than 11,300 deaths have been recorded for the entire outbreak, which was concentrated in Liberia, Sierra Leone, and Guinea, according to WHO.

Liberia was first declared Ebola-free on May 9, but new cases emerged in June resulting in two deaths. WHO declared the country Ebola-free again on September 3.

Officials were not sure how the new patients might have contracted Ebola.

The new cases in Liberia were announced just days after Guinea, the country where the epidemic started, said it had no more Ebola patients and was beginning a 42-day countdown towards being declared free of Ebola transmission.

Guinea had been the last country with any cases as Sierra Leone was declared Ebola-free on November 7.