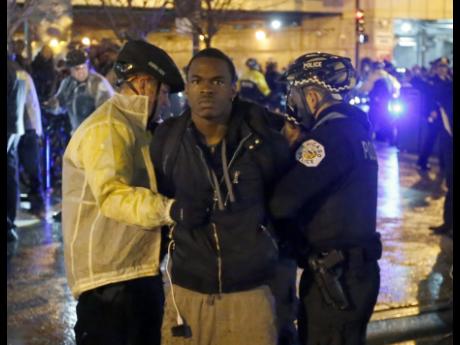 AP
Two Chicago police officers take a man into custody during a protest march in Chicago.

Several hundred protesters amassed on the streets of Chicago a second day in response to the city's Tuesday release of a squad-car video showing a white police officer fatally shooting a black teenager.

Officer Jason Van Dyke is charged with first-degree murder for the 2014 death of 17-year-old Laquan McDonald, who was shot 16 times.

On the night of October 20, 2014, police responded to a call of a teen with a knife. Witnesses said he was breaking into cars and stealing radios.

Police have said McDonald refused their orders to drop the knife and walked away from them. The police union also said that at one point, McDonald lunged at officers with the knife.

The video released on Tuesday shows McDonald jogging down an empty lane on a four-lane street and then veering away from Van Dyke and another officer who emerge from a police SUV drawing their guns. Within seconds, Van Dyke begins firing. McDonald spins around and falls to the pavement as Van Dyke continues to shoot.

Alvarez said police later recovered a knife with a three-inch blade that was folded into the handle.

An autopsy report showed McDonald had the hallucinogenic drug PCP in his system.

A freelance journalist filed a Freedom of Information Act request for the video after learning of the shooting, but the Chicago Police Department refused to release it, saying it could hurt investigations. Activists and attorneys argued that the public had a right to see the video, and last week a Cook County judge agreed. He gave the city until Wednesday to make it public.

At a joint news conference Tuesday evening, Chicago Mayor Rahm Emanuel and Police Superintendent Garry McCarthy discouraged the kind of unrest seen in cities such as Baltimore and Ferguson, Missouri, after young black men were slain by police or died in police custody. Emanuel and McCarthy described the shooting of McDonald as an unusual and tragic incident, and the mayor noted that McDonald's family had asked people not to resort to violence.