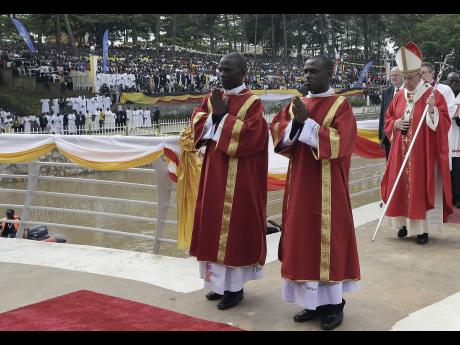 AP
Pope Francis (centre) walks with the pastoral staff as he celebrates a mass near the Catholic martyrs' shrine of Namugongo, Kampala, Uganda, yesterday.

Pope Francis yesterday honoured Uganda's 19th century Christian martyrs and encouraged its 21st century Christian youths during a day that saw nearly a half-million Ugandans turn out to see the pontiff before he headed to Central African Republic for the final leg of his African journey.

The welcome at each of Francis' many stops was as enthusiastic as he has ever received: Pilgrims camped out overnight under rain showers to score a spot for his morning Mass at the site of Uganda's most famous shrine. Some 150,000 young people gave him a rock star's welcome when he arrived in his popemobile for a pep rally.

At each venue, Francis sought to remind Ugandans of their strong Christian roots the former British colony is 47 per cent Catholic and 36 per cent Anglican and encouraged them to apply their faith to today's challenges.

"Remember, you are a people of martyrs," he said. "In your veins runs the blood of martyrs, and for this reason you have such a strong faith."

Francis began the day with a Mass before an estimated 300,000 people honouring the 45 Anglican and Catholic martyrs who were burned alive rather than renouncing their faith during an anti-Christian persecution in the late 1800s.

At the Namugongo shrine, the site of their execution, Francis urged today's faithfuls to use the martyrs' example to be missionaries at home by taking care of "the elderly, the poor, the widowed, and the abandoned."

Later, Francis headlined a giant pep rally at an unused airstrip. Once again, when surrounded by young people, he ditched his prepared speech and spoke from the heart in the casual, conversational style he is known for.