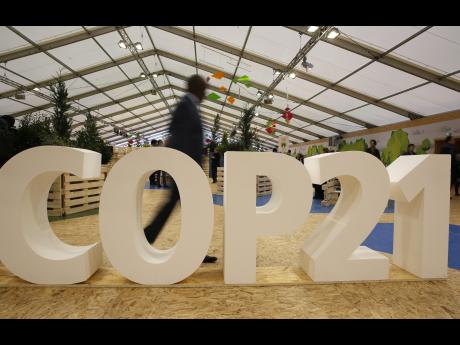 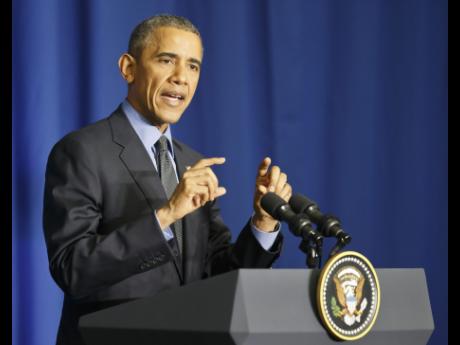 AP
United States President Barack Obama gestures during a news conference at the Organization for Economic Cooperation and Development in Paris, France, yesterday. Obama discussed the climate change conference and the threat of terrorism from the Islamic State group. 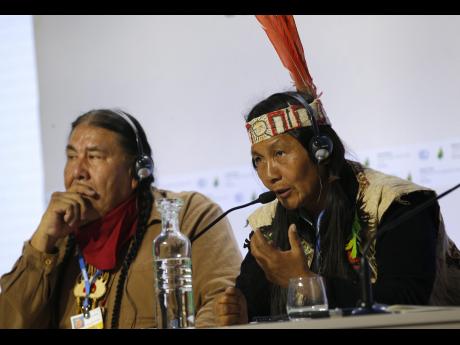 AP
Indigenous leader from the village of Sapara people of Ecuadorian Amazon rainforest Gloria Hilda Ushiqua-Santi, right, speaks while Tom B.K. Goldtooth, executive director of Indigenous Environmental Network, from Bemidji, Minnesota, during a conference on forests at the COP21, the United Nations Climate Change Conference. Envoys at the Paris climate conference say governments and companies need to do more to protect forests, which can help slow global warming. 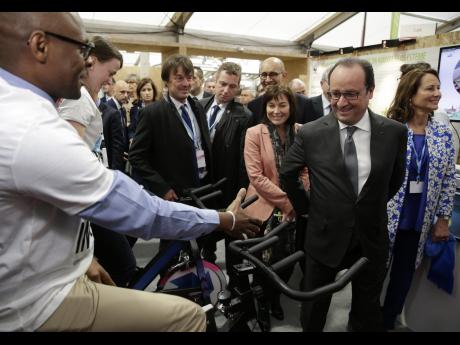 Parts of a global climate agreement being hammered out in Paris should be legally binding, United States President Barack Obama said yesterday.

The declaration was a boost to climate negotiators seeking a tough accord, and a challenge to Republican senators, many of whom don't believe that global warming is real.

Whether or not to make the climate accord legally binding is a major sticking point at the two-week talks at the 2015 Paris Climate Conference (COP21), which is aiming to get all countries to agree to cut emissions that scientists say are warming the Earth and are increasing extreme weather such as droughts and floods.

Obama has spent months prodding other countries to make ambitious carbon-cutting pledges to the agreement, which he hopes will become the framework for countries to tackle the climate issue long beyond the end of his presidency in early 2017.

In Paris, Obama said the specific emissions targets each country is setting to reduce greenhouse gas emissions may not have the force of treaties. But he says to hold each other accountable, it's critical that "periodic reviews" of those commitments be legally binding. He's referring to a mechanism sought by negotiators under which countries would ratchet up their commitments every five years.

"Although the targets themselves may not have the force of treaties, the process, the procedures that ensure transparency and periodic reviews, that needs to be legally binding. And that's going to be critical in us having high ambitions and holding each other accountable," he said.

Obama would have little chance of getting the Republican-run Congress to vote to approve a fully binding new climate treaty fighting global warming. So the White House has been searching for a compromise, in which parts of the deal are binding and others are not, sparing the need for a new vote in Congress.

Republicans have sowed uncertainty about whether the US will make good on its promises made at the Paris conference. Senate Majority Leader Mitch McConnell and other Republican leaders have warned other countries not to trust any deal Obama may strike. Other Republican politicians are working to nullify Obama's emissions-cutting steps at home.

Leaders of poor nations most affected by climate change, meanwhile, shared their stories of global-warming threats yesterday with Obama and French President FranÁois Hollande, from deserts encroaching on African farmland to rising sea levels shrinking islands of the South Pacific.

The encounters highlighted another big debate in the effort to reach an international accord to fight global warming: how much aid rich countries should give poor ones to help them adapt to climate change and reduce their emissions.

"When a young student is forced to go study under a street lamp at night, it clearly demonstrates the electricity issue," Malian President Ibrahim Boubacar Keita said.

Hollande said France would invest billions of euros in the coming years for renewable energy in Africa and to increase Africans' access to electricity.

"The world, and in particular the developed world, owes the African continent an environmental debt," he said.

Obama also met with envoys from island nations hit hard by rising seas and increasingly violent storms, which scientists attribute to climate change prompted by man-made carbon emissions. The Hawaiian-born Obama said he understands the beauty and fragility of island life and called their populations "among the most vulnerable to the ravages of climate change".