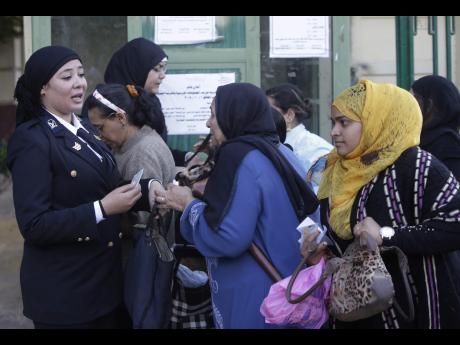 AP
Egyptian policewomen check voters bags at a polling station during the second day of the run-off to the second phase of the parliamentary election in Cairo, Egypt, on Wednesday.

The Egyptian president yesterday pledged to punish police officers who make mistakes amid mounting criticism of the force following the deaths of three people while in custody last month.

Speaking at the police academy in Cairo, Abdel-Fattah el-Sissi said "isolated incidents" do not reflect on the conduct of the whole police force, which is keeping the country safe.

"When someone makes a mistake, we will punish him," el-Sissi said, but added that "an individual's mistake should not lead us to accuse an (entire) institution".

But the president acknowledged what he described as difficulties in maintaining the rule of law in Egypt as the country struggles with a rising Islamic insurgency, especially in the restive northern part of the Sinai Peninsula, where a local Islamic State affiliate has claimed a series of attacks targeting the police and the military.

The fighting in Sinai has surged since the army in 2013, under el-Sissi, who was then army chief, overthrew Islamist President Mohammed Morsi. The IS branch in Sinai also claimed responsibility for the downing of a Russian passenger plane on October 31 that killed everyone on board.

Police brutality was one of the main grievances of protesters in the 2011 uprising that toppled longtime autocrat Hosni Mubarak, but rights activists have reported a return of torture, abuses and arbitrary arrests since that uprising.