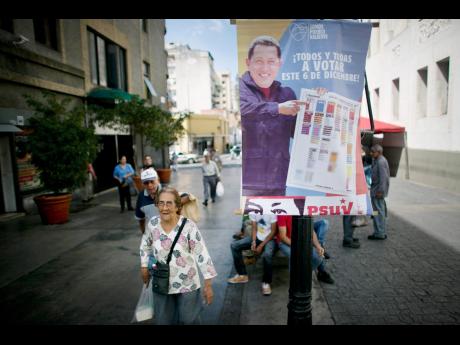 AP
Pedestrians walk near to a poster in Caracas, Venezuela, that shows the late Venezuelan President Hugo Chávez calling persons to vote for the pro-government parties.

Venezuelans are stockpiling food and putting off plans as the South American country brims with excitement and dread ahead of today's elections, which could hand the opposition control of congress for the first time since 1998.

Once-loyal supporters of the late Hugo Chavez appear to be tiring of high crime, widespread shortages, and triple-digit inflation.

The socialists currently hold 99 of Venezuela's 167 legislative seats, but some estimates have the opposition coalition within grasping distance of a two-thirds majority, an outcome that would breathe life into threats to recall Chavez's heir, President Nicolas Maduro, and back up claims that his party's mandate is crumbling.

It is also possible that government opponents could win the popular vote by a landslide but fail to gain that super-majority due to a voting system that favours less populated rural districts over opposition-leaning urban areas.

Opposition leaders, emboldened by polls giving them a 30-point lead in voter supporter, are warning that a loss today could mean only that the government has committed vote fraud.

Maduro's allies, meanwhile, ridicule the opposition for appearing to take a victory lap before ballots have been cast, a prelude to what they have long denounced as a United States-backed plot to undo Chavez's revolution.

At a weekend rally, Maduro shouted that he would "never surrender the revolution".

"If the hard-core right-wingers win on December 6, prepare for chaos, violence, and protests that overwhelm this country," he said.

The mounting tension has spilled into violence in recent weeks, with opposition candidates complaining of armed men surrounding their caravans and beating their aides.

Many Venezuelans are putting their lives on hold until after the election, delaying business travel, putting off decisions, and even holding back on taking cars in for repairs.