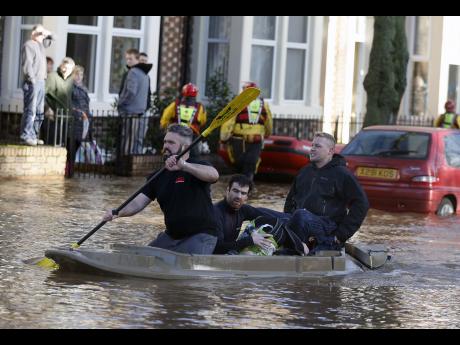 AP
People are rescued from their homes in a kayak after floods on Warwick Street in Carlisle, England, on Sunday. The Environment Agency declared 130 flood warnings, while residents in some areas were evacuated from their homes.

British Prime Minister David Cameron yesterday visited areas hard-hit by flooding after record rainfall in northern England and Scotland led to the death of one person and swamped some 2,000 homes.

The visit comes amid criticism that £45 million spent on flood defences after major floods in 2005 failed to hold back the deluge in Cumbria, the hardest-hit county. The area got a month's worth of rainfall in a day, about 34 centimetres (13.4 inches).

While local leaders demanded an investigation, Floods Minister Rory Stewart defended the government, arguing that defences had slowed down the water to allow more time for evacuations.

"When you face, as we have now, probably the highest rainfall we have ever had in the United Kingdom, it is going to come over the top of defences," he said. "But what the defences do is, they slow it down. It gives us more time. It's given people here more time to evacuate safely, and it's meant that there's less water on the streets than there would have been if we hadn't had that defence in place."

The military has been called in and has been helping evacuate people from their homes. Hundreds of properties are without power and 40 schools are closed.

More rain is forecast for the week. Some 45 severe flood warnings are in place.