An emotional Obama unveils his plan to cut gun violence 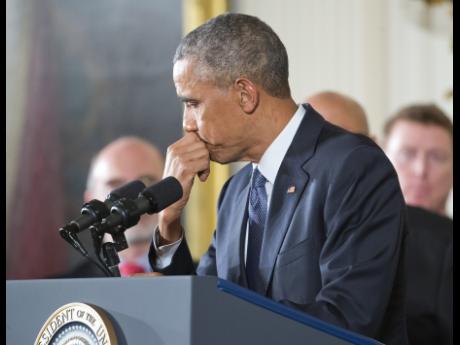 AP
President Barack Obama pauses while speaking in the East Room of the White House in Washington, yesterday, about steps his administration is taking to reduce gun violence.

A visibly emotional President Barack Obama, at one point wiping tears from his cheek, unveiled his plan on Tuesday to tighten control and enforcement of firearms in the United States, using his presidential powers in the absence of legal changes he implored Congress to pass.

Obama accused the gun lobby of taking Congress hostage, but said "they cannot hold America hostage". He insisted it was possible to uphold the Second Amendment while doing something to tackle the frequency of mass shootings in the US that he said had become "the new normal".

"This is not a plot to take away everybody's guns," Obama said in a ceremony in the East Room. "You pass a background check, you purchase a firearm. The problem is some gun sellers have been operating under a different set of rules."

Obama wiped tears away as he recalled the 20 first-graders killed in 2012 at Sandy Hook Elementary School. He paid tribute to the parents, some of whom gathered for the ceremony, who he said had never imagined their child's life would be cut short by a bullet.

"Every time I think about those kids, it gets me mad," Obama said.

At the centrepiece of Obama's plan is a more sweeping definition of gun dealers that the administration hopes will expand the number of sales subject to background checks. Under current law, only federally licensed gun dealers must conduct background checks on buyers. But at gun shows, websites and flea markets, sellers often skirt that requirement by declining to register as licensed dealers.

Aiming to narrow that loophole, the Justice Department's Bureau of Alcohol, Tobacco, Firearms and Explosives is issuing updated guidance that says the Government should deem anyone "in the business" of selling guns to be a dealer, regardless of where he or she sells the guns. To that end, the Government will consider other factors, including how many guns a person sells, how frequently, and whether those guns are sold for a profit.

The White House also put sellers on notice that the administration planned to strengthen enforcement, including deploying 230 new examiners the FBI will hire to process background checks.

The impact of Obama's plan on gun violence remains a major question, and one not easily answered. Had the rules been in place in the past, the steps wouldn't likely have prevented any of the recent mass shootings that have garnered national attention. The Obama administration acknowledged it couldn't quantify how many gun sales would be newly subjected to background checks, nor how many currently unregistered gun sellers would have to obtain a licence.

Pushing back on that critique, Obama said every time the issue is debated, gun rights groups argue the steps wouldn't necessarily have stopped the last massacre, "so why bother trying?"

"I reject that thinking," Obama said, arguing it would be worth it if the measures would prevent even a single gun death. "We maybe can't save everybody, but we could save some."