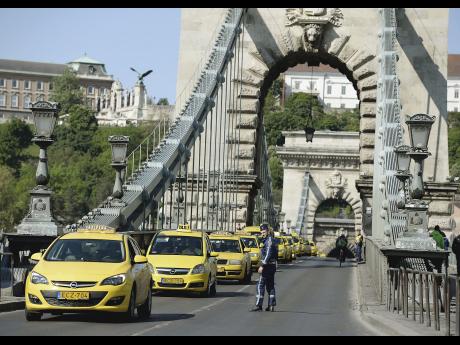 AP
Taxi drivers line up their vehicles at Chain Bridge during their demonstration against the use of Uber rideshare application in downtown Budapest, Hungary, yesterday.

Hundreds of taxi drivers drove slowly on Budapest's main thoroughfares yesterday morning to protest ride-hailing apps like Uber and what they say is a growing market for unlicensed passenger transport.

Taxi drivers also parked in a long line on one side of the Chain Bridge across the Danube River, further complicating downtown traffic.

Drivers said they have invested heavily to comply with regulations which, for example, compel Budapest taxi cabs to be painted yellow.

"In our business, over 50 per cent of those working are part of the black economy, continuing to carry passengers illegally and without permits," said protest organiser Geza Gottlieb. "The number of those dedicated to the illegal transport of passengers in Budapest is growing day by day."

Gottlieb said that while authorities had carried out some "show procedures," including removing licence plates off unlicensed taxis, nothing had really changed since similar protests earlier this year.

Uber did not react to the taxi drivers' complaints, but said it would give its users a discount during the protest hours. This confirmed the fears of some taxi drivers who thought their rally would give Uber more publicity.