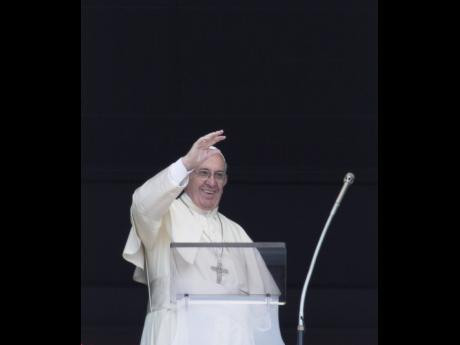 AP
Pope Francis waves during the Regina Coeli prayer from his studio's window overlooking St. Peter's Square, at the Vatican, Sunday, May 1, 2016.

Pope Francis called for "severe punishment" for paedophiles yesterday after new details emerged in Italy of the 2014 death of a six-year-old girl who is alleged to have been thrown from an eighth-storey balcony by her abuser.

"This is a tragedy. We should not tolerate the abuse of minors," Francis said, departing from prepared remarks at his weekly Sunday message and blessing to tens of thousands of people in St Peter's Square.

"We must protect minors and severely punish abusers," he said. Though the Catholic Church itself has been rocked by its own abuse scandals, he did not mention them yesterday as he has in the past.

Italians have been shocked as details emerged in the case of Fortuna, who died in June 2014 after a fall from an eighth-storey balcony in Naples.

After re-opening the case, police charged a 43-year-old-man with having thrown the girl to her death in a housing block in a rough area of the city after raping her. Police said they suspected he killed her so she would not talk.

The man, who has also been accused of molesting other children and is now in prison in Rome, has denied the charges.

On Saturday, Italian President Sergio Mattarella called for an "ample, rapid and severe" judicial process concerning the case, which has dominated newspapers' front pages for days.

Child abuse by priests has plagued the Roman Catholic Church itself for decades.

While some cases of sexual abuse in the church were exposed piecemeal, such as in the US state of Louisiana in the 1980s, the scandal exploded in 2002, when it was discovered that U.S. bishops in the Boston area moved abusers from parish to parish instead of defrocking them.