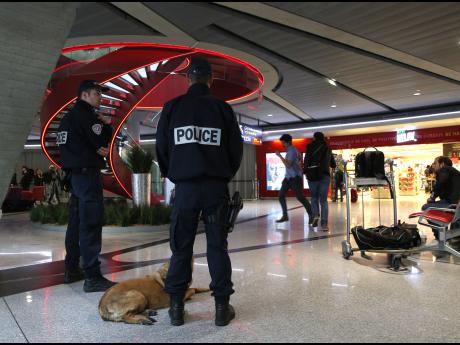 Police officers patrol at Charles de Gaulle airport, outside of Paris, today. An EgyptAir flight from Paris to Cairo with 66 passengers and crew on board crashed into the Mediterranean Sea off the Greek island of Crete early this morning, Egyptian and Greek officials said.

CAIRO (AP):
An EgyptAir jetliner en route from Paris to Cairo with 66 people aboard swerved wildly in flight and crashed in the Mediterranean Sea early today, authorities said.

Egyptian and Russian officials said it may have been brought down by terrorists.

There were no signs of survivors.

EgyptAir Flight 804, an Airbus A320 with 56 passengers and 10 crew members, went down about halfway between the Greek island of Crete and Egypt's coastline, or around 175 miles offshore, after takeoff from Charles de Gaulle Airport, authorities said.

PHOTO: Relatives of passengers on a vanished EgyptAir flight grieve as they leave the in-flight service building where they were held at Cairo International Airport, Egypt today. – AP

Egyptian and Greek authorities in ships and planes searched the suspected crash area throughout the day for traces of the airliner or its victims, with more help on the way from the US, Britain and France.

But as night fell, they had yet to find any confirmed debris, at one point dismissing a reported sighting of life vests and other floating material.

PHOTO: This August 21, 2015 photo shows an EgyptAir Airbus A320 with the registration SU-GCC taking off from Vienna International Airport, Austria. – AP

Civil Aviation Minister Sherif Fathi cautioned that the disaster was still under investigation but said the possibility it was a terror attack "is higher than the possibility of having a technical failure."

Alexander Bortnikov, chief of Russia's top domestic security agency, went further, saying: "In all likelihood it was a terror attack."

There was no immediate claim from militants that they had downed the plane.

If it was terrorism, it would be the second deadly attack involving Egypt's aviation industry in seven months.

Last October, a Russian passenger plane that took off from an Egyptian Red Sea resort crashed in the Sinai, killing all 224 people aboard. Russia said it was brought down by a bomb, and a local branch of the Islamic State claimed responsibility.