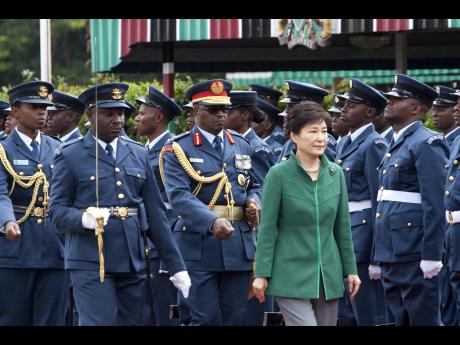 AP
South Korea President Park Geun-hye, in green jacket, inspects the guard of honour at Nairobi State House, Nairobi, Kenya, yesterday. President Park is in Kenya for a two-day state visit during which she is expected to discuss business and trade opportunities.

South Korea's President Park Geun-hye met Kenyan President Uhuru Kenyatta yesterday and discussed the trade imbalance between the two countries on the second day of her three-day visit to Kenya.

Park is in Kenya, East Africa's largest economy, to improve trade between the two nations which currently favours South Korea. Kenya is the third leg of her African tour which started with Ethiopia and Uganda. She received a 21-gun salute and a military guard of honor when Kenyatta received her at State House.

Park is travelling with a delegation of more than 200 who include businessmen and government officials, according to South Korea's ambassador to Kenya Young Dae Kwon.

Bilateral agreements in security, health, agriculture, information technology, trade and culture will be signed in the tour, he said.

At the meeting President Kenyatta said there is need for the two governments strengthen cooperation such as energy, integrated rural and urban development and human development. Kenyatta said there has been steady growth in volume of trade between the two countries, according to a statement from his communication office. He said the trade balance is in favour of South Korea and that the gap can be reduced by allowing more Kenyan products to access the South Korean market.

"These include cut flowers, coffee, black tea, and fresh produce such as mangoes, avocadoes, pineapples among others, which are world class products and are traded in international markets," said Kenyatta.

"We believe that an increase of exports would improve trade relations between our countries."

He noted that the Kenyan government is eager to enter a memorandum of understanding of cooperation in electric power and nuclear energy development with the government of South Korea.