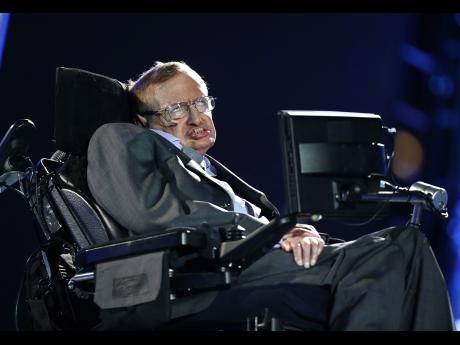 AP
In this file photo dated Wednesday August 29, 2012, British physicist, Professor Stephen Hawking speaks during the opening ceremony for the 2012 Paralympics in London. Hawking was interviewed on British TV Monday saying the United Kingdom should stay inside the European Union because of its support for research, and he cannot fathom the popularity of presumptive candidate for US president, Donald Trump, saying he "seems to appeal to the lowest common denominator".

Renowned theoretical physicist Stephen Hawking may have a good grasp of the workings of the universe, but he says he can't understand Donald Trump's popularity.

Hawking told ITV's "Good Morning Britain" show yesterday that he has no explanation for the success of the presumptive Republican Party presidential nominee.

"He is a demagogue who seems to appeal to the lowest common denominator," Hawking says in prerecorded comments to be broadcast when the show airs at 6 a.m. London time (0500 GMT, 1 a.m. EDT) yesterday.

Hawking, who speaks through a computer system operated with his cheek, also made a plea for British voters to choose to remain in the European Union in the June 23 referendum.

He said it was important, not only for economic and security research, but also to further scientific research.

Hawking said: "Gone are the days we could stand on our own, against the world. We need to be part of a larger group of nations, both for our security, and our trade."

Hawking has a form of amyotrophic lateral sclerosis, known as Lou Gehrig's disease, that has gradually paralysed him since he was first diagnosed at age 21.