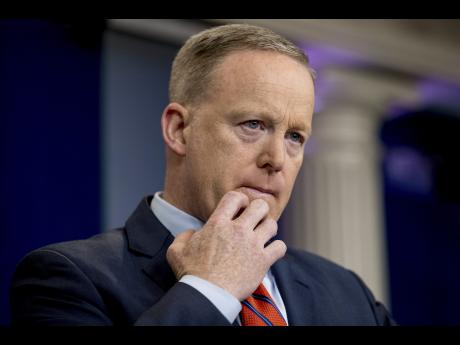 White House Press Secretary Sean Spicer said yesterday that Adolf Hitler "didn't even sink to using chemical weapons" in a clumsy comparison to Syria that drew instant rebuke from Jewish groups and critics who noted that it ignored Hitler's use of gas chambers to exterminate Jews during the Holocaust.

Spicer was attempting to discuss the horror of the chemical-weapons attack last week in Syria, which the Trump administration is blaming on President Bashar al-Assad.

It was the second day in a row in which Spicer, President Donald Trump's main spokesman, appeared to struggle to articulate the president's foreign policy at a critical time. The White House generated criticism at the start of the year when a statement on international Holocaust Remembrance Day did not make any reference to Jews.

Asked by a reporter to clarify, Spicer delivered a garbled defence of his remarks in which he tried to differentiate between Hitler's actions and the gas attack on Syrian civilians last week. The attack in northern Syria left nearly 90 people dead, and Turkey's health minister said tests show that sarin gas was used.

"I think when you come to sarin gas, there was no, he (Hitler) was not using the gas on his own people the same way that Assad is doing," Spicer said. "There was clearly ... I understand your point, thank you. There was not ... He brought them into the Holocaust centre, I understand that."

"I appreciate the clarification. That was not the intent," he said.