Moscow accuses US of unlawful Syria raid as Tillerson visits 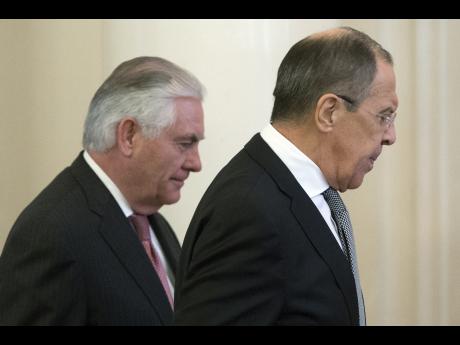 Giving Tillerson a chilly reception, Russian Foreign Minister Sergey Lavrov said Russia was trying to understand the "real intentions" of the Trump administration. He said Moscow has lots of questions about the "very ambiguous" and "contradictory" ideas emanating from Washington.

"We have seen very alarming actions recently with an unlawful attack against Syria," Lavrov said, referring to the cruise missiles President Donald Trump ordered to punish Assad for using chemical weapons. "We consider it of utmost importance to prevent the risks of replay of similar action in the future."

It was an ominous start to Tillerson's visit the first to Russia by a Trump Cabinet official. Tillerson conceded the two world powers had "sharp differences" that have obstructed cooperation but voiced optimism that their talks could narrow those differences.

"We both have agreed our lines of communication shall always remain open," Tillerson said.

Trump, meanwhile, told Fox Business News that the U.S. had no plans to become more deeply involved in Syria and only did so because of last week's deadly chemical weapons attack that killed dozens. Turkey has said tests showed sarin gas was used.

"Are we going to get involved with Syria? No," Trump said in the interview, which aired yesterday in the U.S. "But if I see them using gas...we have to do something."

'This is an animal'

The palpable tension hanging over U.S. Secretary of State Rex Tillerson's trip to Russia, spoke to a widening chasm between the former Cold War foes.

Only weeks ago, it appeared that Donald Trump, who lavishly praised Russian President Vladimir Putin throughout the election campaign, was poised for a potentially historic rapprochement with Russia.

But any expectations of an easy rapport have crashed into reality as the two countries trade escalating accusations over what happened last week in rebel-held territory in northern Syria.

Of Assad, Trump added: "This is an animal."

Over 1,000 arrested in anti-Putin protests
Two lawyers not joining Trump's legal team after all
UK home secretary: 'Too early' to pin blame in spy case
'I don't care': Putin on alleged US election interference
Democrats are playing politics with memo, says Trump