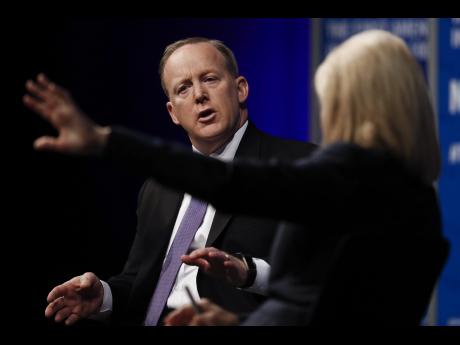 White House press secretary Sean Spicer said yesterday that his attempt to compare the Holocaust and Syrian President Bashar Assad's use of chemical weapons was "inexcusable and reprehensible" and was made all the worse by this being a holy week for millions of Christians and Jews.

He said his comment, made Tuesday at the White House briefing, was personally and professionally disappointing, and he asked for "folks' forgiveness".

"To make a gaffe and a mistake like this is inexcusable and reprehensible," Spicer said during a previously scheduled appearance at a forum on the presidency and the press sponsored by the Newseum. He noted that Christians were preparing for Easter on Sunday, and Jews were celebrating Passover.

"It really is painful to myself to know that I did something like that," Spicer said. "That obviously was not my intention. To know when you screw up that you possibly offended a lot of people ... I would ask obviously for folks' forgiveness to understand that I should not have tried to make a comparison."

Spicer apologised Tuesday during an interview with CNN.

It was the second consecutive day in which President Donald Trump's principal spokesman appeared to struggle to articulate Trump's foreign policy at a critical time. The White House generated criticism at the start of the year when a statement on international Holocaust Remembrance Day did not make any reference to Jews.

In the CNN interview, Spicer said his comments did not reflect Trump's views. "My comments today did not reflect the president's, were a distraction from him and frankly were misstated, insensitive and wrong." He added, "Obviously it was my blunder."

The interview capped several attempts by the White House to clarify Spicer's statement.