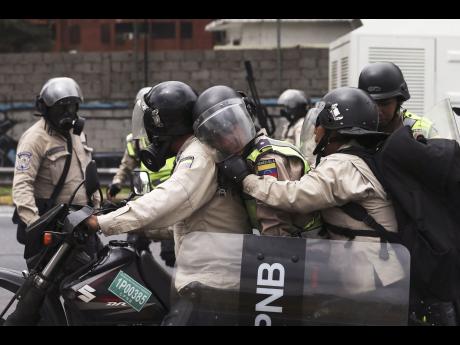 AP
A police officer, centre, is loaded onto a motorcycle by fellow officers after he was wounded during clashes with anti-government protesters in Caracas, Venezuela, yesterday.

Venezuelan Inte-rior Minister Nestor Reverol is blaming an opposition party for the killing of a 23-year-old woman amid ongoing protests in the South American country.

Reverol said yesterday that Paola RamÌrez was killed on Wednesday by a member of Vente Venezuela, a party led by high-profile opposition leader MarÌa Corina Machado.

Vente Venezuela did not immediately respond to the accusation. Machado said that the Government was trying to blame her party for the killing of a young woman that the administration itself was responsible for.

RamÌrez was killed over the past day in the restive western border city of San CristÛbal amid protests that also left two others dead a teenage boy reportedly on his way to a soccer match with friends, and a National Guard officer whose unit was attacked.

The minister said that a preliminary investigation suggests that the Vente Venezuela attack on RamÌrez was planned in advance.

San CristÛbal Mayor Patricia GutiÈrrez has said that RamÌrez was shot to death by people who appeared to be government supporters.

Meanwhile, the spokesman for UN Secretary-General Antonio Guterres says that the organisation is "concerned" about what is happening in Venezuela and urges that "all efforts be made to lower tensions and prevent further clashes".

A statement issued yesterday by spokesman Stephane Dujarric calls on the Venezuelan government and opposition to "engage sincerely to reactivate dialogue efforts, especially on issues such as the balance of power among branches of government, the electoral calendar, human rights, truth and justice, and the country's socio-economic situation".