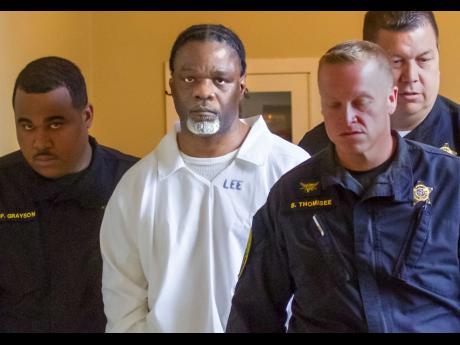 AP
In this Tuesday, April 18, 2017 file photo, Ledell Lee appears in Pulaski County Circuit Court for a hearing in which lawyers argued to stop his execution. (AP)

Arkansas carried out its first execution in nearly a dozen years despite a flurry of legal challenges that spared three convicted killers, but courts still could scuttle the remainder of the nation's most ambitious death penalty schedule since capital punishment was restored in 1976.

Ledell Lee was pronounced dead shortly before midnight on Thursday, capping a chaotic week of legal wrangling. Arkansas originally wanted to put eight inmates to death before the state's supply of midazolam, one of three drugs used in its lethal injection process, expires at the end of April.

Three of those executions were cancelled this week because of court decisions. Another inmate scheduled for execution next week has received a stay. But Arkansas wants to put two other inmates to death Monday and another one next Thursday.

Lee, 51, was put on death row for the 1993 death of his neighbour, Debra Reese, who was struck 36 times with a tire tool her husband had given her for protection. Lee was arrested less than an hour after the killing after spending some of the $300 he had stolen from Reese.

The execution was carried out without any apparent glitches. There had been concern because midazolam was used in some flawed executions in other states.

Lee showed no signs of consciousness two minutes after the injection began. He made no final statement and showed no apparent signs of suffering during the execution.

The state originally set four double executions over an 11-day period in April. That would have been the most by a state in such a compressed period since the US Supreme Court reinstated the death penalty in 1976.

Lee's execution went ahead after the US Supreme Court rejected last-minute appeals from his lawyers. But at least one high court justice expressed serious reservations about what critics have called Arkansas' rush to the death chamber.

Executions in China said to outpace world despite decline