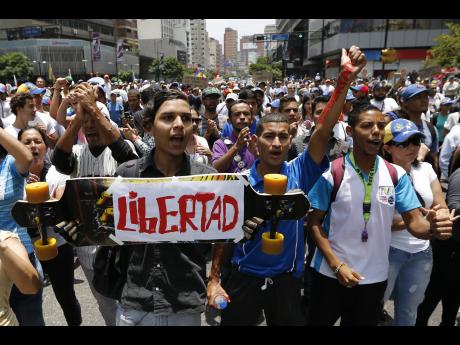 At least 12 people were killed overnight following looting and violence in Venezuela's capital amid a spiralling political crisis in the South American country, authorities said yesterday.

The Public Ministry confirmed the deaths yesterday and said that another six were hurt.

Most of the deaths took place in El Valle, where opposition leaders say 13 people were hit with an electrical current while trying to loot a bakery protected by an electric fence.

Earlier Friday, officials reported that a young Venezuelan man returning home late from work on Thursday had been fatally shot when he got caught in the middle of late-night street clashes that engulfed several working-class neighbourhoods in Caracas.

Melvin Guitan died in a poor neighbourhood in eastern Caracas amid the almost-daily, increasingly violent protests against President Nicolas Maduro.

Venezuelan social media was ablaze late into the night with grainy cell phone videos of light armoured vehicles ploughing down dark streets to control pockets of protesters who set up burning barricades in several neighbourhoods. At least five people were injured in one disturbance a short distance from Caracas' main military base.

Amid the confusion, mothers and newborn children had to be evacuated from a maternity hospital when it was swamped with tear gas. But while anti-government protesters accused riot police of being behind the attack, Foreign Minister Delcy Rodriguez said armed groups hired by Maduro's opponents were to blame.

No intention of pulling back on protest - Opposition

Vicente Paez, a local councilman, said Melvin Guitan, who died in the protest, was an employee of a Caracas-area city governed by an opposition mayor and didn't join the protests. It wasn't clear who shot him, and there was no immediate comment from authorities.

The outburst of violence followed a second straight day of major demonstrations on Thursday which saw tens of thousands of Venezuelans flood into the streets to demand elections and denounce what they consider a dictatorial government.

The opposition has said it has no intention of pulling back on protests triggered when the government-stacked Supreme Court three weeks ago gutted congress of its last vestiges of power, a move that was later reversed amid a storm of international criticism.

"Twenty days of resistance and we feel newly born," said opposition lawmaker Freddy Guevara during an evening, outdoor press conference. Residents looking out from balconies in the eastern Caracas neighbourhood that is at the heart of the protest movement cheered loudly in support.

The next planned protest is Saturday, when opponents are being asked to dress in white and march silently to commemorate the victims of the demonstration. There's also a sit-in to block major highways planned for Monday.