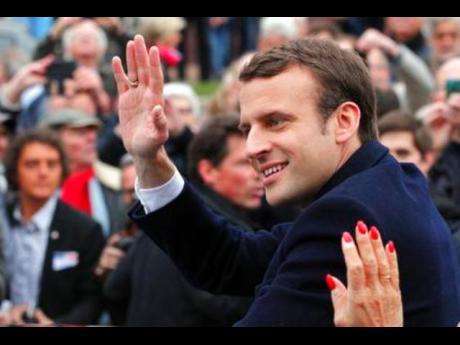 AP
Centrist candidate Emmanuel Macron waves supporters after casting his vote in the first round of the French presidential election, in le Touquet, northern France, on Sunday.

The selection of Le Pen and Macron would present voters with the starkest possible choice between two diametrically opposed visions of the European Union's future and France's place in it.

With Le Pen wanting France to leave the EU, and Macron wanting even closer cooperation between the bloc's 28 member states, the projected outcome Sunday means the presidential runoff would have undertones of a referendum on France's EU membership.

It also would represent a seismic shift in the French political landscape, with neither of the candidates from the mainstream left Socialists or the right-wing Republicans party - which have governed post-war France - making the runoff.

Pollsters projected that conservative former Prime Minister Francois Fillon was trailing the two leading candidates and that Socialist Benoit Hamon was far behind. Hamon quickly conceded defeat but declared "the left is not dead" and urged supporters to back Macron.

Voting took place amid heightened security in the first election under France's state of emergency, which has been in place since gun-and-bomb attacks in Paris in 2015.

"We will win!" Le Pen supporters chanted in her election day headquarters in Henin-Beaumont. They burst into a rendition of the French national anthem, and waved French flags and blue flags with "Marine President" inscribed on them.

Mathilde Jullien, 23, said she is convinced Macron will be able to win over Le Pen and become France's next president.

"He represents France's future, a future within Europe," she said. "He will win because he is able to unite people from the right and the left against the threat of the National Front and he proposes real solutions for France's economy."