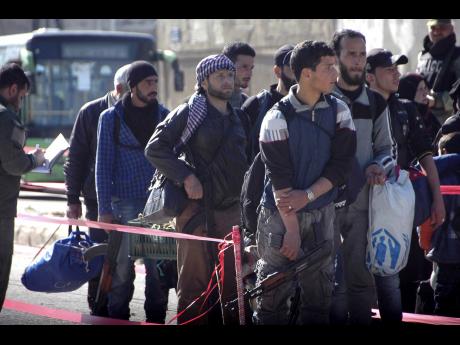 Uncredited
Syrian opposition fighters hold their weapons as they prepare to board a bus to leave the last rebel-held neighborhood of al-Waer in Homs province, Syria yesterday

An airstrike killed eight family members, five of them children, as they fled fighting between US-allied Syrian forces and Islamic State militants yesterday, according to local activists, who said the strike appeared to have been launched by the US-led coalition.

Al-Qaida's leader meanwhile urged his followers and other militants in Syria to unite and prepare for protracted jihad, or holy war, against what he called an "international satanic alliance", apparently referring to the Syrian government, its ally Russia, and the US, all of which are targeting the group.

The family was fleeing fighting in the northern Syrian town of Tabqa when their vehicle was struck, according to the Britain-based Syrian Observatory for Human Rights, which said the five children were between six months and 15 years old.

The activist-run Raqqa is Being Slaughtered Silently also reported the airstrike, saying a family was killed.

The US-backed Syrian Democratic Forces, which also include Arab fighters, are trying to expel IS from Tabqa before moving on to Raqqa, the de facto capital of the jihadi group. Tabqa is 40 kilometers (25 miles) southwest of Raqqa.

The US and its allies are believed to be the only forces flying missions over Tabqa. The Observatory said the US-backed fighters entered Tabqa on Monday, but the town remains largely under IS control.

The Islamic State group and al-Qaida have been bitter rivals since they split apart in 2013, with the former claiming to represent the world's Muslims in an apocalyptic showdown with the West and the latter fighting alongside the Syrian opposition.