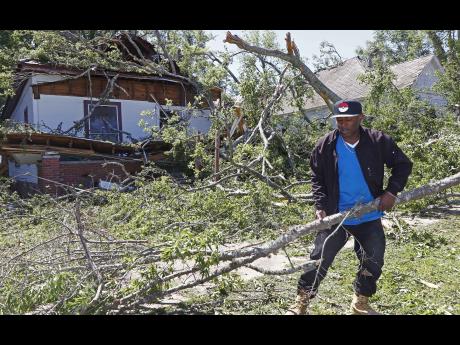 Sixteen months after a rare Christmas week flood devastated towns along the Meramec River near St Louis, sandbags were rapidly piling up again Monday as the small but flood-prone river streamed over its banks, part of the aftermath of brutal weekend storms that also includes an ongoing search for two missing children in Arkansas.

Severe storms spawned tornadoes in the South, flooding in the Midwest and even a rare mid-spring snowstorm in the plains. At least 16 people died, and authorities are still searching for two children in Arkansas swept away by floodwaters and now presumed dead.

It's not over yet. Parts of the US Midwest and South braced for more flooding and possible tornadoes as storms rolled eastward in a band stretching from Alabama into the Ohio River valley.

Some areas of Missouri were drenched with up to 12 inches of rain over the weekend. Normally docile creeks swelled to dangerous levels, and river levels jumped.

The Missouri State Emergency Management Agency counted 143 water rescues statewide, but acknowledged that countless others probably weren't reported. Hundreds of people were evacuated,, a levee was topped in a rural area northwest of St. Louis, and a 57-mile stretch of Interstate 44 was closed.

The Mississippi River was well above flood stage at several points, including Cape Girardeau, Missouri, where it is expected to crest later this week within a half-foot of the all-time record of 48.9 feet.

Near Cape Girardeau, residents of tiny Allenville were urged to evacuate, but many did not, even as the town was surrounded by water. The only way in or out was by boat.