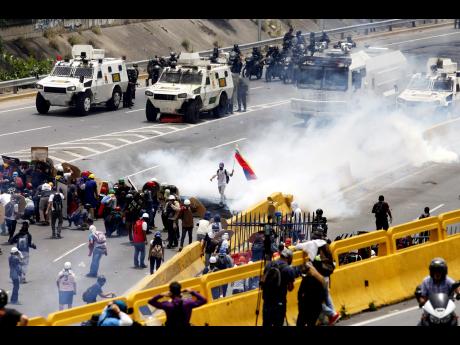 CARACAS, Venezuela (AP) — Thousands of protesters were met with plumes of tear gas in Venezuela's capital Wednesday, just miles from where President Nicolas Maduro delivered a decree kicking off a process to rewrite the troubled nation's constitution.

Surrounded by top-ranking socialist officials, a combative, riled-up Maduro told supporters dressed in red outside the National Electoral Council that the constitutional assembly was needed to instill peace against a violent opposition.
"I see congress shaking in its boots before a constitutional convention," he said, referring to the opposition-controlled legislature.
A short distance away, national guardsmen launched tear gas at demonstrators who tried marching toward the National Assembly.
"The repression has started," said Miguel Pizarro, an opposition congressman, as clouds of white tear gas swirled near him. "That's how those who want to maintain a dictatorship with violence act."

The latest push by Maduro to settle an increasingly deadly and contentious political crisis comes as the Trump administration warns it might impose more sanctions on Venezuelan officials and members of the U.S. Congress are pushing the administration to act more forcefully to rein in Maduro.
Yesterday, a bipartisan group of senators said it will introduce legislation providing humanitarian assistance to Venezuela while toughening sanctions against corrupt officials, according to Senate aides who spoke on condition of anonymity.
The legislation, a copy of which was obtained by The Associated Press, also instructs the intelligence community to prepare a partly unclassified report on Venezuelan government officials' involvement in corruption and drug trafficking.
Four people were killed in the mounting turmoil overnight. Two died when the bus they were traveling in flipped when it tried to avoid a barricade set up by protesters, according to opposition activists who live near the accident site in Carabobo state. A third person was killed during looting at a shop in the industrial city of Valencia and a motorcyclist died after being struck by a car trying to swerve away from a protest, the chief prosecutor's office said.
The deaths bring to at least 34 the number of people who have died in the unrest over the past month. Hundreds more have been injured.

Driving the latest outrage is the decree by Maduro to begin the process of rewriting Venezuela's constitution, which was pushed through in 1999 by his predecessor and mentor, the late President Hugo Chavez.