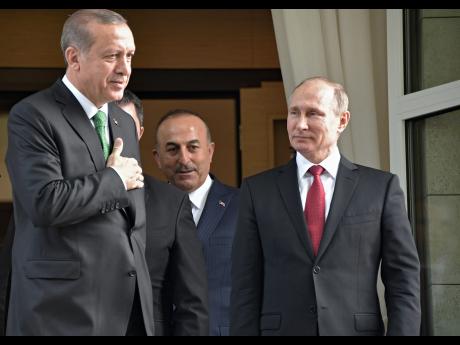 The presidents of Russia and Turkey said yesterday they support the creation of safe zones in war-torn Syria as a delegation of Syrian rebels walked out of cease fire talks with the Damascus government under way in Kazakhstan, citing repeated violations of a similar truce agreed on in December.

Meeting in the Russian resort town of Sochi, Recep Tayyip Erdogan and Vladimir Putin expressed hope the Syrian government and rebels would adopt this latest proposal to "de-escalate" the conflict, which has run now for six years and claimed some 400,000 lives.

Turkey and Russia are deeply entangled in the war in Syria, including each having troops on the ground there Ankara supporting various Syrian opposition factions and Moscow backing President Bashar Assad's forces.

Before the rebels suspended their participation at the talks in Astana, the Kazakh capital, Russian representatives had presented the rebels with a proposal for four "de-escalation zones" in Syria where the warring sides would be separated by "security lines". The Astana talks are proximity talks, with Syrian government representatives and the rebels separately meeting with Russian officials and other representatives.

The rebels demanded a halt to the government's bombardment of opposition zones in Syria.

In Sochi, Putin said Russian and Syrian government jets would halt flights over the specified zones if all sides respect the cease fire.

Russia's 2015 military intervention in Syria and its air campaign have significantly boosted Assad's gains in the war. However, human rights groups say Russia is implicated in targeting hospitals and schools, and using indiscriminate cluster munitions and incendiary weapons against civilian areas as well.