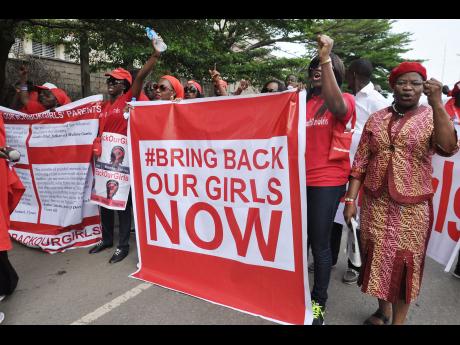 The newly released girls arrived at the Abuja airport and were met by Buhari's chief of staff, presidential adviser Femi Adesina said. The president was expected to meet with the schoolgirls at 4 p.m. local time (1500GMT).

The 82 girls were freed Saturday in exchange for an unspecified number of detained Boko Haram suspects, Buhari's office said in a statement.

This is the largest negotiated release so far of the nearly 300 girls whose abduction in 2014 highlighted the threat of Nigeria's homegrown extremists who are linked to the Islamic State group. Before Saturday's release, 195 of the girls had been captive. Now 113 girls remain unaccounted for.

A first group of 21 girls were released in October as Nigeria announced it had begun negotiations with the extremist group. At the time, the government denied making an exchange for Boko Haram suspects or paying ransom.

The girls released in October have been reported to be in government care in Abuja for medical attention, trauma counselling and rehabilitation, according to the government. Human rights groups have criticised the decision to keep the girls in custody in Abuja, nearly 900 kilometres (560 miles) from Chibok.

The newly freed schoolgirls should be quickly released to their families and not be subjected to lengthy government detention, Amnesty International's Nigeria office said, adding that they don't deserve to be put through a "publicity stunt" and deserve privacy.

The International Committee of the Red Cross, which along with the Swiss government has mediated negotiations between Nigeria's government and Boko Haram, said the girls soon would meet with their families.

The ICRC also tweeted what might be the first public image of the freed schoolgirls on Sunday, showing a line of young women wearing shirts with the ICRC logo waiting to board a helicopter.

The ICRC said it had acted as a neutral intermediary to transport the girls into Nigerian custody.

Long-suffering family members said they were eagerly awaiting a list of names of the girls and their "hopes and expectations are high."

The Bring Back Our Girls campaign said Sunday it was happy that Nigeria's government had committed to rescuing the 113 remaining schoolgirls. "We urge the president and his government to earnestly pursue the release of all our Chibok girls and other abducted citizens of Nigeria," the group said in a statement.

The 276 schoolgirls kidnapped from Chibok in 2014 are among thousands of people abducted by Boko Haram over the years.

The mass abduction brought the extremist group's rampage in northern Nigeria to world attention and began years of heartbreak for the families of the missing schoolgirls.

Some relatives did not live to see their daughters released. Many of the captive girls, most of them Christians, were forced to marry their captors and give birth to children in remote forest hideouts without knowing if they would see their parents again. It is feared that other girls were strapped with explosives and sent on missions as suicide bombers.

A Nigerian military official with direct knowledge of the rescue operation said the freed girls were found near the town of Banki in Borno state near Cameroon.

Buhari late last year announced Boko Haram had been "crushed," but the group continues to carry out attacks in northern Nigeria and neighbouring countries. Its insurgency has killed more than 20,000 people and driven 2.6 million from their homes, with millions facing starvation.