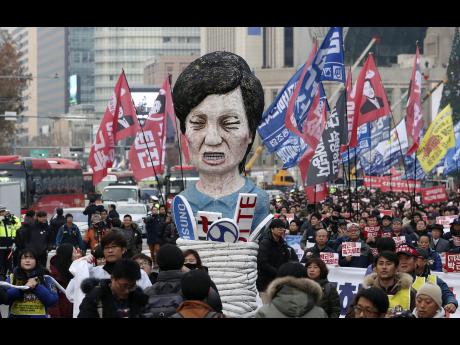 AP
In this November 30, 2016 file photo, members of the Korean Confederation of Trade Unions carry an effigy of South Korean President Park Geun-hye as they march during a rally in Seoul, South Korea calling for Park to step down.

Creating jobs, ending corruption and boosting stubbornly low birth rates should be high on a to-do list for South Korea's next president after a campaign mostly dominated by security and foreign policy issues.

There's concern that the economy will likely take a back seat to North Korea when South Koreans pick their next leader on Tuesday. Voters have been rattled by a row over who should foot the bill for a US anti-missile system deployed in the country to defend against North Korean aggression, after President Donald Trump suggested that South Korea should pay more for US security commitment.

Public demand for change in South Korea's economic system remains high as growth and wealth continue to be concentrated in the hands of a few top family-run business giants known as chaebol. Anger over allegations of collusion between big businesses and the government helped trigger massive months-long protests that led to the ouster of President Park Geun-hye in March and the arrest of the de facto leader at Samsung, South Korea's largest business group.

Leading presidential contenders have tried to tap into the discontent over economic injustice, high youth unemployment and increased inequality between those with full-time jobs at chaebol and those who are underemployed or looking for work.

But the lack of concrete reform plans means that none of their economic agenda gained much attention during the campaign.

"Candidates fell short of expectations from the public and could not thoroughly cover the reform agenda to change the economic system," said Park Sang-in, a professor at Seoul National University's Graduate School of Public Administration. "Their talks on jobs and innovation were so superficial that they could not win public support."