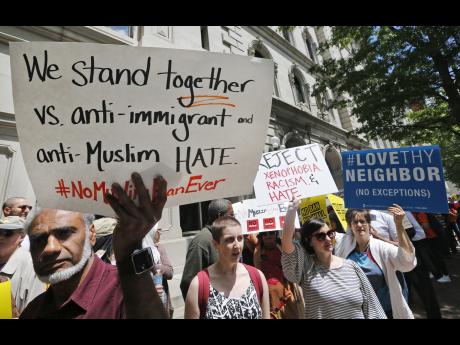 AP
Protesters hold signs and march outside the US 4th Circuit Court of Appeals in Richmond, Va.,yesterday.

A challenge to President Donald Trump's revised travel ban appears to hinge on whether a federal appeals court agrees that the Republican's past anti-Muslim statements can be used against him.

The 4th US Circuit Court of Appeals wrestled yesterday with whether the court should look beyond the text of the executive order to comments made by Trump and his aides on the campaign trail, and after his election, in order to determine whether the policy illegally targets Muslims.

"That's the most important issue in the whole case," Judge Robert B. King said.

The panel of 13 judges peppered both sides with tough questions and gave few clues as to how they might rule. The judges did not immediately issue a decision yesterday.

A federal judge in Maryland, who blocked the travel ban in March, cited Trump's comments as evidence that the executive order is a realisation of Trump's repeated promise to bar Muslims from entering the country.

The administration argues that the court shouldn't question the president's national security decisions based on campaign promises.

The countries were chosen because they present terrorism risks and the ban applies to everyone in those countries regardless of religion, Wall said. Further, the banned countries represent a small fraction of the world's Muslim-majority nations, lawyers for the administration say in court documents.